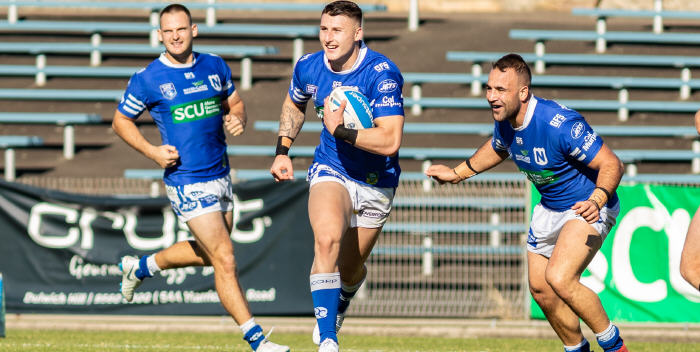 It’s all smiles at Henson Park as on-debut Newtown centre Bronson Xerri, flanked by Matt Evans (left) and team captain Anthony Moraitis, races in for one of his three tries for the Jets. Photo: Mario Facchini, mafphotography

Jets precision first half blows Wenty off the park

The Newtown Jets turned on a first half tour de force in their Intrust Super Premiership 16th Round match against Wentworthville at Henson Park on Saturday. The Jets ran up a 34-4 halftime lead, including three tries to on-debut centre Bronson Xerri. Wentworthville fought back in the second half and out-scored Newtown by 20-16, but the Jets prevailed overall by 50-24.

Coach Greg Matterson said that Newtown’s first half performance was the team’s best this season, with a completion rate of 19 sets out of 20. The six tries scored in the first half involved outstanding execution and the team’s set plays all worked to good effect.

Impressive centre Bronson Xerri, a NSW under 18 and NSW CHS representative, strode in for three tries in the first half and was denied what would have been his fourth by an alleged obstruction. Young Xerri is obviously a player of the future and he is sure to remember his senior level rugby league debut at Henson Park on Saturday.

Newtown hooker Blayke Brailey, front-rower Braden Uele, five-eighth Jack A. Williams and second-rower Briton Nikora all had exceptional first halves. There were some necessary changes made to the team line-up in the second half which took the edge off the precision of Newtown’s ball play. Newtown’s on-line defence also fell away marginally which would not have pleased head coach Matterson. The Jets scored nine tries to five, with backrower and team captain Anthony Moraitis and winger Charlton Schaafhausen each claimed two, while Blayke Brailey and centre Addison Demetriou also scored tries. Demetriou was successful with seven out of nine conversion attempts.

The Jets return to Henson Park next Saturday, 7th July, when they host the Newcastle Knights. This 17th Round match will commence at 3.00pm. There will be Jersey Flegg Cup curtain-raisers between Sydney Roosters and North Sydney at 10.45am, and between Cronulla Sharks and Newcastle Knights at 12.45pm.

This match was televised live by Channel Nine.

Newtown centre Bronson Xerri was on debut for the Jets yesterday. He is a student at Endeavour Sports High School and has represented the NSW CHS and NSW under 18 teams. Bronson was still eligible for the Cronulla Sharks SG Ball Cup team in 2018 and he is a product of the Aquinas Colts JRLFC.

Here is the full round of results for the ISP NSW 16th Round plus the updated premiership table after 16 rounds: http://live.nswrl.com.au/comp/413e134259bc4ebcf

Newtown’s partnership club Glebe-Burwood RLFC (aka the Glebe Dirty Reds) played Blacktown Workers in Round 12 of the Ron Massey Cup at Henson Park on Saturday at 3.30pm. Glebe-Burwood ran out winners by 38-28 and the win keeps the Dirty Reds well entrenched in the fight for a top four finish.

The Dirty Reds have a bye in the Ron Massey Cup competition next weekend.