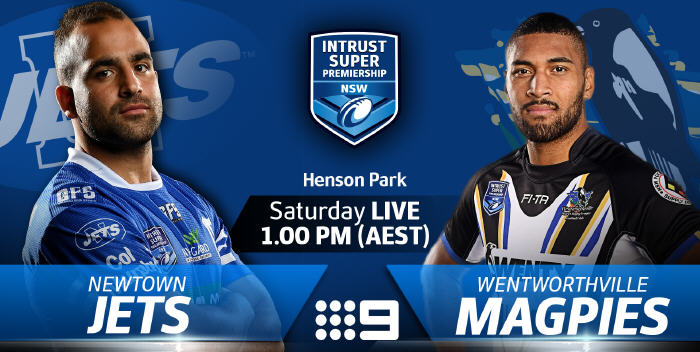 It’s that time of year again as representative commitments and injuries start to kick in, and Newtown confronts Wentworthville at Henson Park in another Channel Nine game kicking off at 1.00pm.

This game is being televised live by Channel Nine.

It is also being broadcast live by Steele Sports.

There is a Ron Massey Cup fixture being played at Henson Park on Saturday at 3.30pm. 5th placed Glebe-Burwood (aka the Glebe Dirty Reds) takes on 8th placed Blacktown Workers. The Newtown RLFC urges all Jets supporters to stay on after the Newtown-Wenty match to lend support to our Ron Massey Cup partnership club.  There are several Newtown Jets-contracted players playing for the Dirty Reds on Saturday and they would appreciate your support.

As always there will be plenty of fun for the kids on the DEICORP Family Hill featuring jumping castles, face painting & pass the ball. Ice Cream Joe’s Mr Whippy & Barista will be in attendance along with JETMAN & SCU – More Generous Banking’s SYD THE PIG.

Young Henrys NEWTOWNER, Natural Lager & Cloudy Cider are available for all the Mums, Dads and over 18s plus a selection of wines from Sparrow & Vine.

Crust Pizza Dulwich Hill is offering Jets’ supporters a complimentary serve of Herb & Garlic Squares or a 1.25L when purchasing any Large Gourmet Pizza from 544 Marrickville Road, Dulwich Hill. Be certain to ask our canteen staff for a free Pizza Perks voucher for your chance to redeem this great offer.