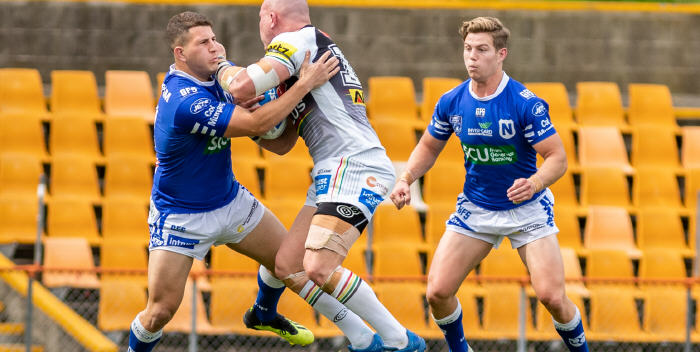 In their 110th year as a rugby league club, the Newtown Jets have eliminated Penrith Panthers from the 2018 Intrust Super Premiership title race. The Jets defeated Penrith 28-24 in the hard-fought preliminary final played at Leichhardt Oval last Saturday afternoon. They now move forward to take on Canterbury-Bankstown in the ISP NSW grand final at Leichhardt Oval next Sunday, 23rd September. Newtown led Penrith 16-12 at halftime and 28-18 with 17 minutes left to play, and then had to defend desperately in the last 15 minutes against a Panthers team hell-bent on winning two premiership titles in a row.

The match was played in unusually warm conditions and the Jets looked less than convincing in the opening twenty minutes. Front-rower Kurt Dillon was assisted from the field midway through the first half which left Newtown to contend with a three-man bench for the remainder of the game.

The second half began badly for Newtown with the Panthers scoring a converted try after four minutes to reclaim the lead by 18-16. The Jets replied quickly through hooker Blayke Brailey who sent second-rower Briton Nikora racing over at the northern end, with Flanagan’s conversion putting Newtown back in front 22-18. Nikora scored again in the 61st minute when he pounced on a perfectly-directed grubber kick from Flanagan. The halfback’s conversion extended Newtown’s lead to 28-18.

The Panthers were back in contention through a converted try fifteen minutes out from fulltime. Penrith had two tries disallowed in the second half but the general consensus was that the referee had made the right call on each occasion. The Panthers also had a first half try disallowed because of a forward pass. The overwhelmingly pro-Newtown crowd roared the Jets home in the thrilling latter stages of the second half, with the Newtown players grimly defending their line as the fulltime siren sounded.

The Newtown Jets will now play the Canterbury-Bankstown Bulldogs in the 2018 NSWRL Intrust Super Premiership grand final at Leichhardt Oval on Sunday, 23rd September at 3.10pm.

The playing surface at Leichhardt Oval was excellent.

Newtown kicked off with Penrith running to the northern end.

The match was televised live by Channel Nine.