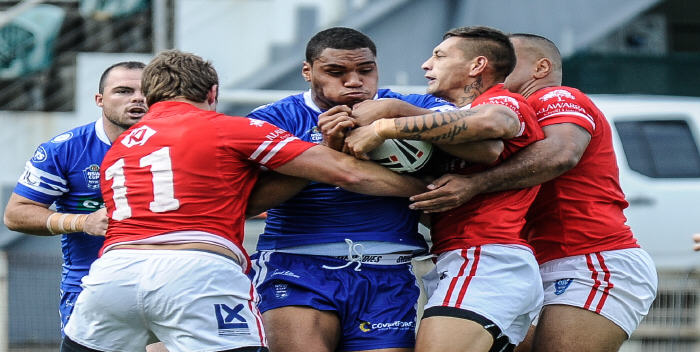 Report on the fourth round NSWRL VB NSW Cup match between Cutters and Newtown, played on Saturday, 29th March 2014, plus details of Newtown’s next match.

The Newtown Jets remain winless in the 2014 VB NSW Cup competition after they lost 24-14 to the Illawarra Cutters at WIN Stadium, Wollongong last Saturday. The St George-Illawarra partnership club led 12-6 at halftime but only ensured their win ten minutes out from fulltime.

This was a much-improved showing from the Jets and they would have regretted missed scoring chances in both halves that could have changed this result. The Cutters fielded a team with plenty of NRL experience and a huge forward pack, and the willingness of the smaller Newtown forwards to take it up to their bigger opponents was one of the more admirable features of the Jets’ performance.

Neither side scored in the first twenty minutes, and this was a period of play in which both teams missed scoring opportunities. The Cutters scored right on the twentieth minute mark and Newtown equalised ten minutes later when centre Rhyse Martin pounced on a well-flighted kick into the southern end in-goal by halfback Arana Taumata. The Cutters scored a somewhat soft try four minutes before the break to go in at halftime leading 12-6.

Jets coach Greg Matterson was pleased with Newtown’s first half and pointed out that poor completions and scrappy play had cost the Jets dearly on several occasions when they had been in possession at the Cutters’ end of the field.

Illawarra scored early in the second half to extend their lead to 18-6. Newtown stayed in the contest when second-rower Jack Siejka showed great determination to win the race to touch down another kick into the in-goal by Arana Taumata. The Jets missed a couple of other scoring chances and the Cutters scored what proved to be the match-sealing try ten minutes out from full-time.

Newtown turned on some clever ball-work and support play when Arana Taumata, Kurt Kara and Brett Lane combined to send Shannon Gallant over in the 78th minute.

Jack Siejka continued his good form and is having a strong debut season in the VB NSW Cup. Kurt Kara had his best game of the season and made valuable metres through the middle on several occasions. The Newtown forwards showed plenty of spirit in taking on the physically imposing Cutters pack. Arana Taumata was involved in all three of Newtown’s tries in his second game with the club.

The Jets make their first appearance at home for 2014 when they play Canterbury- Bankstown at Henson Park next Saturday, 5th April. This fifth round of the VB NSW Cup fixture is timed to kick off at 3.00pm.

Newtown’s team versus Illawarra was: