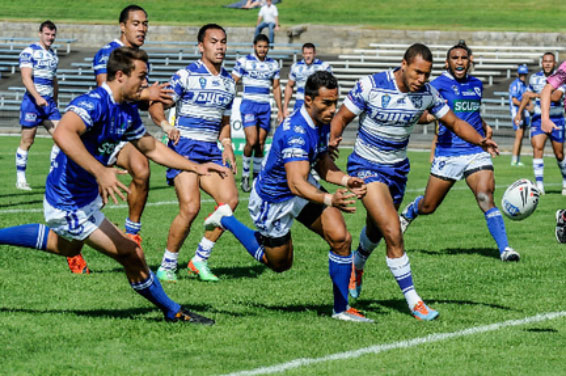 Report on the fifth round NSWRL VB NSW Cup match between Cutters and Newtown, played on Saturday, 5th April 2014, plus details of Newtown’s next match.

The Newtown Jets and Canterbury-Bankstown fought out a 14-all draw in the 5th round NSW Cup match played at Henson Park on Saturday. Both sides made a lot of errors but there was still enough skilful play and honest endeavour to keep the crowd of over a thousand interested right up to the final siren.

This was Newtown’s first home game for the 2014 season and the Jets were super- keen to record their first win. The Bulldogs missed a sure-fire scoring opportunity in the second minute but Jets five-eighth Samisoni Langi scored two minutes later in the wake of some strong drives by the Newtown forwards in Canterbury’s quarter. Jets forwards Jack Noble and Saulala Houma went close to scoring on two other occasions in the first half. Some wayward passing by Newtown and kicks that were too heavily weighted brought other try-scoring possibilities undone.

The Jets maintained their 4-0 lead until half-time. The Bulldogs had a completion rate of less than fifty per cent in the first half but Newtown had failed to take full advantage of their larger share of possession. Coach Greg Matterson had sent out a message for his players to build and sustain pressure at the Bulldogs end of the field, rather than relying on the big plays to bring dividends.

Canterbury had the better of the third quarter, scoring two unconverted tries to take an 8-4 lead. The Bulldogs improved their ball control and were making good ground up the middle. Newtown’s best play of the game came with ten minutes remaining, when giant prop and former Dragon Kem Seru ran onto a sublime short pass from Samisoni Langi to score at the northern hill end. Arana Taumata’s conversion gave Newtown a 10-8 lead, and three minutes later front-rower Saulala Houma scored another of his trademark rampaging tries. Taumata’s conversion attempt, which might have secured a win for the Jets, bounced away from an upright.

The Bulldogs regained the ball from a well-placed short kick-off and worked play down to Newtown’s end. There was more than a touch of controversy when the Bulldogs a converted try to draw level at 14-all. Arana Taumata’s late field goal attempt was unsuccessful, with the Jets and Canterbury having to settle for one competition point each.

The Jets coaching staff nominated hooker Kurt Kara as Newtown’s man of the match, while noting improved displays from Saulala Houma and Jack Noble. Jack Siejka continues to set high benchmarks with his work-rate. Arana Taumata and Samisoni Langi look to be gelling as a halves combination.

Newtown’s team versus Canterbury was:

Newtown is home again this Saturday, 12th competition leaders and Parramatta partnership club Wentworthville at Henson Park. This 6th round NSW Cup match gets underway at 3.00pm. The Roosters and Sea Eagles junior representative curtain-raisers kick off at 11.30am and 1.00pm. Next Saturday at Henson Park is also designated as a Family Fun Day, with plenty of attractions to keep the youngsters entertained. April, when the Jets host the joint Caption: Follow the bouncing ball …. Newtown Jets halfback Arana Taumata (in centre) leads several team-mates and Canterbury Bulldogs opponents in a race for the football at Henson Park last Saturday.