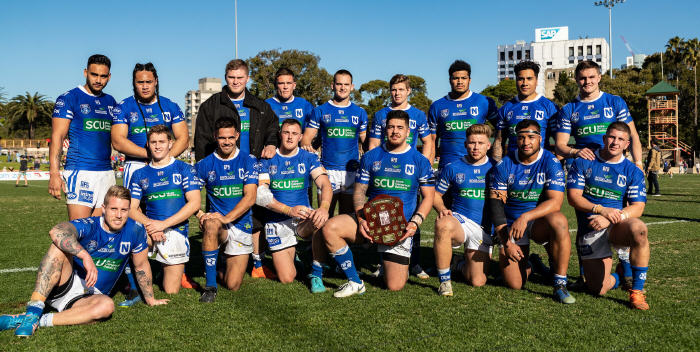 The Newtown Jets have retained possession of the Frank Hyde Shield for another year by virtue of being the current holders. This year’s series was tied with two drawn games, and in 2017 the two clubs each won one game and lost one game, and had identical points for and against! The full team complement is: Standing, from left to right: Briton Nikora, Charlton Schaafhausen, Daniel Vasquez, Kurt Dillon, Matt Evans, Blayke Brailey, Malakai Houma, Sosaia Feki, Kyle Flanagan. In front, from left to right: Aaron Gray, Jack A. Williams, Will Kennedy, Jimmy Jolliffe, Braden Uele (Captain), Lachlan Stein, Ava Seumanufagai, Billy Magoulias. Photo: Mario Facchini, mafphotography

The Newtown Jets and North Sydney Bears drew 22-all at Henson Park back on the 5th May – and yesterday the two clubs finished up 28-all at North Sydney Oval.

The Jets led 16-4 at halftime and should have gone on with the job when they led 28-10 after 55 minutes. Newtown’s mistake rate increased and they conceded penalties as the Bears surged, drawing level with five minutes left to play. For the second year in a row the Frank Hyde Shield stays in Newtown’s possession as the Jets are the current holders.

Here is a link to Mario Facchini’s photographs from North Sydney Oval:

And here are the Round 18 ISP NSW match results and the updated competition table:  http://live.nswrl.com.au/comp/413e134259bc4ebcf
Newtown is now in third place – but you will readily observe how tightly contested the competition table is.

Newtown’s next match details are: