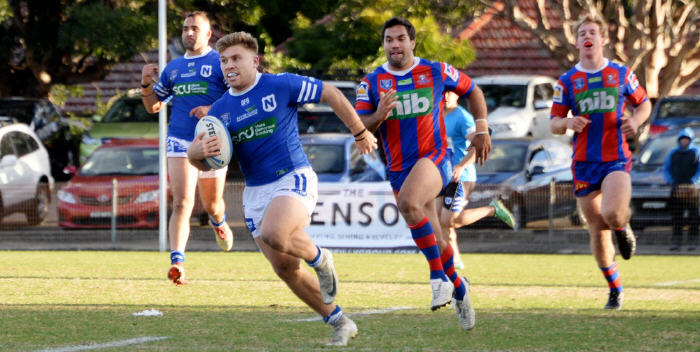 The Frank Hyde Shield goes on the line this Saturday at North Sydney Oval at 12.45pm

Newtown Jets supporters need to be aware of another early kick-off when the Jets take on North Sydney in the deciding game of the 2018 Frank Hyde Shield series.

The North Sydney and Newtown clubs extend an invitation to their members, supporters and friends to a Post-Game Party at The Greens, from 4.00pm on Saturday to celebrate both clubs’ 110th birthdays. The Greens is located at 50 Ridge Street, North Sydney.

Details of this Saturday’s game:

It is also being livestreamed from 12 noon on Steele Sports (www.steelesports.com.au) and on Twitter (www.twitter.com/newtownrlfc)

Here’s a fine piece of writing by rugby league historian Terry Williams as he recalls meeting with Frank Hyde, one of the greatest identities in Australian rugby league history:
http://www.newtownjets.com/frank-hyde-through-blue-eyes/

And the North Sydney team is:

Do yourselves a favour and check out the Newtown Jets merchandise website: www.newtownjetsclothing.com.au for the sensational brand new design 1908 Henson Park Hoodie, along with other items in the top-class range of Newtown Jets clothing and merchandise.

You can also purchase all of these items at Henson Park home games, on most Saturdays at the Newtown Jets marquee at 280A King Street, Newtown (opposite the Dendy Cinemas), or by calling 02-90526980.

Don’t forget that the fabulous Beer, Footy & Food Festival is on at Henson Park on Saturday, 28th July, with a huge array of local craft breweries, food vendors, children’s entertainment plus of course the Newtown Jets in full confrontation mode with the Penrith Panthers at 3.00pm. Tickets are available from Oztix ( https://tickets.oztix.com.au/?Event=88198 ) or at the gate.

Please note that the breweries and food vendors are all cashless on the day, so be sure to bring your payWave cards!

And who on earth is that mysterious bearded man/photo bomber at the back of the photo?

The Glebe Dirty Reds (aka Glebe-Burwood RLFC) had a bye last weekend. They play Western Suburbs in Round 14 of the Ron Massey Cup on Sunday, 15th July at 2.00pm at Goddard Park, Concord.