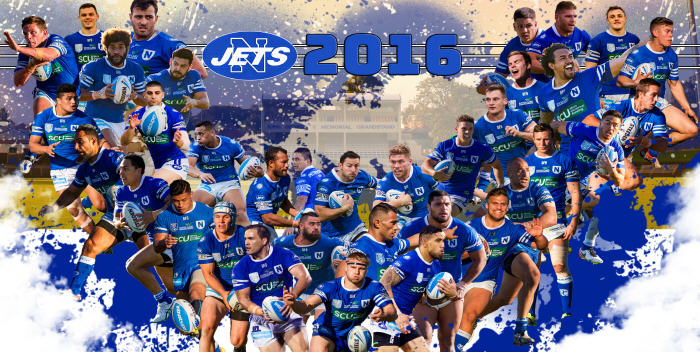 Here’s a great photographic collage of all 35 players who turned out with the Newtown Jets in the 2016 ISP NSW competition. Photo: Compiled and designed by Mario Facchini.

Another new season gets underway for the Newtown Jets

While various momentous events have tended to dominate world headlines in recent days, let it be known that the Newtown Jets began pre-season training on the evening of Thursday, 10th November 2016. Head coach Greg Matterson convened a staff meeting prior to the players’ training session at the Newtown Jets gymnasium. The boys will be in pre-season training on four occasions a week up until Xmas. The Henson Park playing surface is undergoing some summer-time rehabilitation, so the Jets will do some of their pre-season field sessions at the Mahoney Reserve complex in south Marrickville.

The Newtown RLFC is in recruiting mode with several of the Cronulla Sharks players who gave such great service to the Jets in 2016 having moved on to other clubs. Our NRL partners the Sharks have been busy in their own off-season player recruitment, while the Jets will be announcing some new player signings in the upcoming weeks.

Jets head coach Greg Matterson enters his tenth successive year in charge at Newtown, a record for this club and a rare extended coaching tenure in NSW Rugby League circles. The Jets have won one premiership and narrowly lost another Grand Final under Matterson’s stewardship since 2008. Newtown has only missed the finals in two of the past nine seasons under Matterson’s coaching.

2017 Newtown RLFC membership packages are being prepared and invitations to take out 2017 memberships will be issued very soon. Revenue from club memberships is very important to the continued existence of this club, as we do not have the financial and organisational resources that our opponents in the Intrust Super Premiership NSW have at their disposal. When you take out a membership with the Newtown RLFC it means that you are a direct stakeholder in the future of this historic old club which will celebrate its 109th birthday on the 8th January 2017.

Newtown Jets forwards Malakai Houma and Kurt Dillon have both been invited to undertake their pre-season training programs on a full-time basis with the Cronulla Sharks NRL squad.

The Newtown club is well represented by Jets alumni in the 2016 Four Nations tournament currently underway in England. Boyd Cordner and Jake Friend are in the Australian squad; Shaun Kenny-Dowall is in the New Zealand squad; and Luke Douglas and Kane Linnett are both playing with the Scottish Bravehearts.

Backrower Remi Casty (who played with Newtown on several occasions in 2014) captained France when they played England in Avignon prior to the commencement of the Four Nations tournament.

Spotted at Newtown’s first pre-season training session was that lightning-fast fullback from the 2010 NSW Cup season, Luke Towers, who had previously starred with the Sydney Roosters NYC squad. Luke has played in recent seasons in the French Rugby League Elite (First Division) competition with Limoux and has been among the top try-scorers in all of those seasons. He scored what might well have been one of the greatest tries ever seen at Henson Park back in 2010 against a very strong Melbourne Storm NSW Cup team:  https://www.youtube.com/watch?v=yG_lZXG1osQ

Junior Vaivai was a more than useful centre with Newtown in 2014 and apparently he might be playing with the Toronto Wolfpack rugby league team when the Canadians enter the UK Kingstone Press League One completion in 2017: https://en.wikipedia.org/wiki/Toronto_Wolfpack

Two former Newtown Jets were joint player-coaches with Yanco-Wamoon in Group 20 in 2016 – Tuki Jackson and Glenn Dumbrell. Jackson has recently been appointed captain-coach of the strong Albury Thunder club in Group 9 for 2017.

The Newtown RLFC extends best wishes to Jamie Soward who recently announced his retirement as a rugby league player. Jets supporters will well remember Jamie’s great performances with Newtown in the 2006 and 2007 seasons.

Newtown Jets clothing and merchandise is available right throughout the off-season on the dedicated merchandise website: www.newtownjetsclothing.com.au

For any special merchandise inquiries please contact Olga Lauricella on 0412 712 612 or olga@newtownjets.com