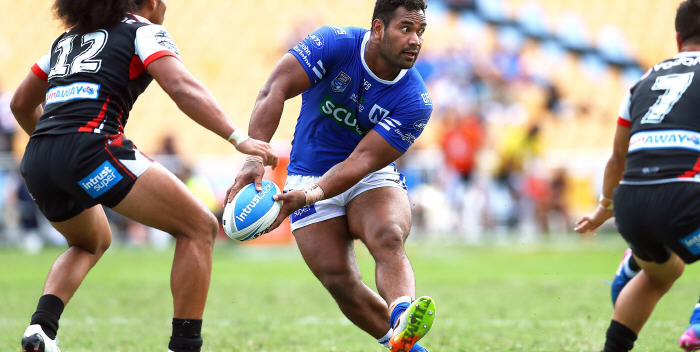 Jets get very close to toppling the undefeated competition leaders.

Newtown took a strong side to Auckland for this 6th round Intrust Super Premiership match against the undefeated New Zealand Warriors. After what coach Greg Matterson described at fulltime as the team’s best performance so far this season, the Jets still came up just short of a winning result. The Warriors led 10-8 at half-time and opened up a 24-14 lead with nine minutes to play. Newtown pulled back to trail 24-20 with two minutes to go but the Warriors survived the Jets’ late surge.

The match was televised live on Sky Sports (NZ) and Fox League 502 (Australia).

“This was the best we’ve played this season, but the truth is we still lost”;

“The Warriors kicking game at Newtown’s end of the field was more effective than ours”;

“I wasn’t disappointed with our effort, just aspects of our execution”;

“We didn’t nail certain plays that ultimately made the difference”.

“The Warriors rose to the challenge in this game. They knew that the Jets had several players with a lot of NRL and international experience”:

“I thought our forwards did well up the middle especially in the second half”;

“Our halves Hingano and Lino did well and are key players in this team”;

“The repeat sets we gained made the Jets do extra hard work in defence”;

“We’ve worked very hard at making this a much fitter reserve grade team than previously”.

Newtown kicked off, running to the northern end of Mt Smart Stadium.

8th min: Jordan Drew scores in the north-west corner after some good ball handling to create the overlap.

Not converted by Nu Brown. Newtown 4-0.

Jesse Ramien prevents the ty by punching the bouncing ball across the sideline.

Lino’s conversion attempt bounces away off an upright. 4-all.

30th min: Jordan Drew shows enormous strength and determination to wrestle his way through three determined tacklers to score in from the nth west corner.

Not converted by Nu Brown. Newtown 8-4.

37th min: Midfield break by Mason Lino ends in another try to Nicoll-Klokstad.

Repeat sets at the Warriors end put Newtown in a strong attacking position.

Newtown actually receives 4 penalties in a row within a few minutes from referee Kasey Badger.

Jets kick into the in-goal is defused by Warriors.

Strong defence keeps Newtown at bay in this danger period.

David Palavi barges over near the posts, converted by Lino. Warriors lead 16-8.

57th min: Try to Jayden Walker to the right of southern goal posts.

Warriors fans howl their disapproval at Badger’s contentious ruling of a try.

Midfield penalty to Warriors and Sam Cook makes ground from a fast tap.

Warriors forward Bunty Afoa held up over the line by some exceptional Jets defence.

73rd min: Warriors forwards carry the ball a long way downfield in one set. Ofahiki Ogden runs into a defensive gap and scores.

Jets don’t get another shot at the Warriors end, midfield chip kick cleaned up by Nicoll-Klokstad.

The New Zealand Warriors are in first place and are undefeated on 12 points; Newtown is in 8th position on 4 points.

How Matty Buxton from the NSWRL reported on the NZ Warriors-Jets match:  http://www.nswrl.com.au/news/2017/04/09/warriors_forwards_se.html