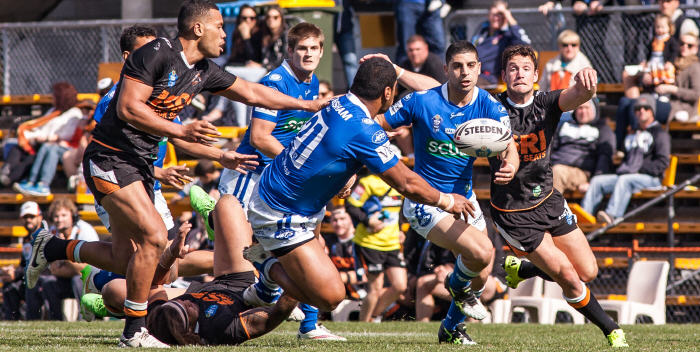 Draw keeps the Jets finals hopes alive … but only just

Report on the 22nd Round VB NSW Cup match between Newtown and Wests Tigers, played at Leichhardt Oval on Saturday, 8th August 2015 by Glen ‘Bumper’ Dwyer.

All the tension of finals football came early to Leichhardt Oval last Saturday, as the Newtown Jets and Wests Tigers fought out a 22-all draw in the 22nd round of the NSW Cup. Wests Tigers led 12-6 at the break and 16-10 ten minutes into the second half, and then the Jets took a 22-16 lead with fifteen minutes left to play. The Tigers drew level at 22-all with two minutes remaining, and they added to the drama with a last-minute long-range field goal attempt that drifted wide.

This televised match was played in perfect weather and with the Leichhardt Oval playing surface in pristine condition. The Jets had to weather some early pressure and then scored first when Sami Sauiluma sent Nathan Gardner over in the north-western corner, with Todd Murphy converting from the sideline. The Tigers scored twice on the back of Newtown errors at their own end to lead 12-6 after 18 minutes. The Jets then had to withstand an extended period of pressure with Wests Tigers having several sets inside Newtown’s twenty metres. The Tigers missed a couple of scoring opportunities in this period and Newtown then had some attacking chances closer to halftime.

Both teams went close to scoring early in the second half but Newtown turned on a classic try in the 50th minute that could feature in any club’s season highlights. Myles Taueli, Saulala Houma, Blake Ayshford and Sami Sauiluma were all involved in a high speed, precision passing movement that saw Nathan Gardner collect his second try. Wests Tigers responded quickly through a booming 40/20 kick that led to the Tigers scoring a try and extending their lead to 16-10.

The Jets best period of the game was midway through the second half, with well-taken tries to Daniel Abou-Sleiman and Tarek Elmasri that were both converted by Todd Murphy. The pendulum swung back to the Tigers late in the game when there were critical incidents that allowed them attacking momentum. Repeat sets gave Wests Tigers the edge that saw them post a converted try two minutes from fulltime. Both sides had to settle for the one competition point but one Jets official noted that as he watched the last-minute field goal attempt soar towards the posts, “he was thinking the unthinkable”.

Newtown coach Greg Matterson observed that this was yet another tight finish for the Jets where they did not come away with the two competition points. There had been plenty of effort right across the team but Newtown’s errors at critical moments late in the game gave the Tigers that belated window of opportunity. Younger Jets players like Malakai Houma, Daniel Abou-Sleiman, Tarek Elmasri and Myles Taueli deserved mention for their strong performances in such a high pressure game.

The Newtown Jets return home to Henson Park this Saturday (15th August) for what is a must-win assignment against the third-placed Penrith Panthers. This 23rd round NSW Cup match will kick off at 3.00pm.