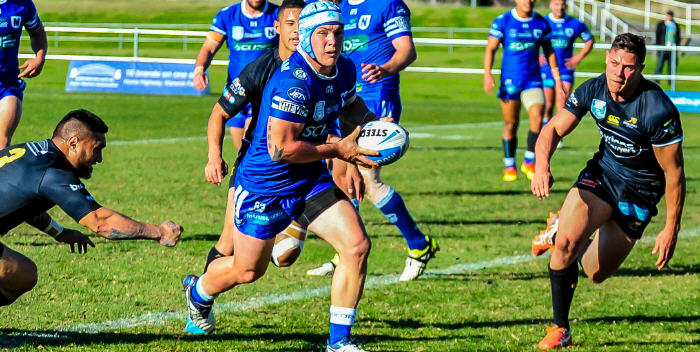 Fatal flaws prove to be the Jets downfall

Details of the 23rd Round ISP NSW match between Mounties and Newtown, played at the Aubrey Keech Reserve, Hinchinbrook on Saturday, 13th August 2016 by Glen ‘Bumper’ Dwyer.

With a place in the competition’s top four as an incentive, the Jets turned on one of their best displays of the season in the first thirty-nine minutes of this match against the competition leaders. A converted try to Mounties after the halftime siren saw Newtown take a 16-6 lead into the break. The Mounties proved for the second time in recent weeks that they are great escape artists (two weeks ago they had overhauled a 28-6 half-time lead by Wests Tigers). On Saturday Newtown extended their lead to 24-6 thirteen minutes into the second half, but Mounties pulled back through three converted tries to draw level at 24-all with seven minutes left to play. The Jets conjured up what might have been the match-winning try in the 77th minute, but failed to close out the game when they had the chance. Mounties pulled off a one hundred-metre try in the 79th minute that was converted to snatch a most improbable 30-28 win.

The win guarantees Mounties the 2016 Intrust Super Premiership NSW minor premiership. Other 23rd round results ensured that the Jets at the very least cannot miss a place in the top eight, and Canterbury’s upset win over the New Zealand Warriors in fact keeps the Jets’ hopes of a top four finish (and a double-chance in the finals) alive. The infuriating circumstances of this loss were particularly gut-wrenching for players, team staff, officials and supporters alike but as coach Greg Matterson said to his players back in the dressing rooms, “individual errors are not to blame – in this club we win as a team, and we lose as a team. Now let’s get ready to meet the Bears at Henson Park”.

This match is the second leg of the 2016 Frank Hyde Shield series.

There are four teams (including Norths) engaged in a desperate struggle for seventh and eighth positions, so the Bears will come to Henson Park ready for the fight of their lives.

Newtown can still make the top four so that will be a huge incentive for the Jets on Saturday.

Strapping young centre Keenan Yorston from the Cronulla Sharks NYC (Holden Cup) squad was on debut for the Newtown Jets, and we congratulate him on this honour: http://www.sharks.com.au/team/profiles/keenan_yorston.html

You can always count on John “The Phantom Bluebag” Lynch for the last laugh:

When he saw the Mounties team he remarked, “there are more Kennedys on the Mounties team-sheet than you’d find at Hyannis Port!” (You have to be well-versed in American politics to get that one …)

Mounties kicked off with Newtown defending the southern end of the ground.

2nd min: Mounties turned the ball over at their end.

Newtown tackled strongly in these early sets, keeping Mounties at their end.

Gagan had plenty of work to do before scoring.

Not converted by Capewell. Newtown 4-0.

Jets mount a promising attack immediately from the kick-off.

Errors at this stage are 3-1 to Mounties.

Penalty to Newtown for stripping by Mounties.

20th min: Fa’amanu Brown slices through for one of his trademark tries, 5m to the left of the posts.

Capewell converted from the sideline and Newtown led 16-0.

Mounties get the ball at Newtown’s end; Jets winger Corin Smith makes a good catch on a high kick close to Newtown’s try-line.

Mounties get another shot at Newtown’s line but they knock on.

38th min: Newtown kicked out on the full and then Mounties get a penalty in the next set.

39th min: Williams kick into the in-goal is caught and Alofi Mataele scored.

Williams converted from the sideline.

Second half:
Jets kicked off.

Mounties predictably looking very energised after their late first-half try and their quest to narrow the points deficit.

Capewell kicks a penalty goal in the 44th min. Newtown 18-6.

Jets lost the ball at their own end, Mounties went close to scoring.

Errors by both teams pointed to the increasing tension of the game.

Saulala Houma is held up over the line.

Continued handling errors by both teams.

51st min: Anthony Moraitis crashes over for his second try.

Jaline Graham is down for treatment to an injury.

58th min: Ottio scores from an intercept, 5m to the right of the posts.

Mounties throw the ball around as the minutes run down.

67th min: Good hands by Mounties ended in a dummying run by Williams, scores to the right of the posts.

Williams converted his own try; Newtown 24-18.

Mounties making big metres, Jets knocked on 40m out from their own line.

Shaun Fensom scores for Mounties under the posts; Williams converts; 24-all.

Jets under the pump to say the least.

Penalty to Jets for Mounties high tackle; Brown finds the line 30m out from Mounties line.

78th min: Ball gets to Gagan who scored in north-east corner.

Thanks to all the Newtown supporters who made the journey out to Hinchinbrook.