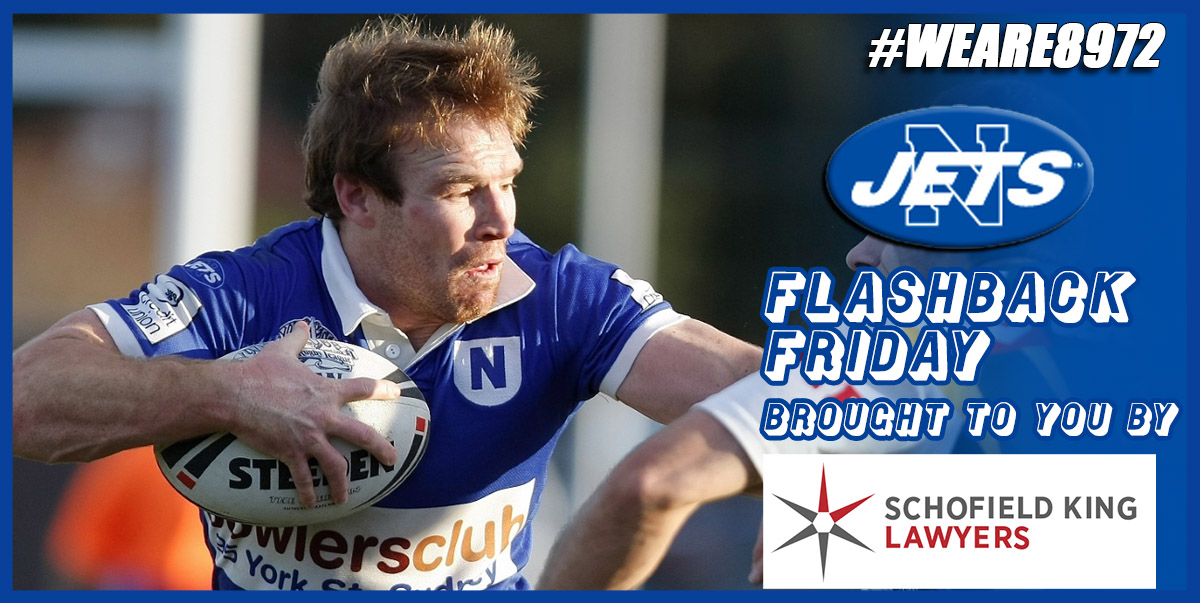 In many respects it’s pretty apt that Sean’s surname is Rudder, as across his long and varied career, the former Bluebags captain has circumnavigated the world more times than Magellan and Captain Cook combined.

When he first arrived at Henson Park in 2008, Rudder was somewhat of a globe trotter, having played both codes of rugby across three continents.

However, despite playing footy in exotic locations like Japan and the picturesque Perpignan, the 2001 NRL premiership winner nominates his stint with Newtown as one of the happiest of his career.

“I loved my time at Newtown,” he says.

“Outside of those golden years with the Knights, I’d say it was the most enjoyable time of my career.

“I had just enrolled at uni and I was basically just playing footy for fun without having to worry about anything.

“The fans were really passionate and I had a really good relationship with Matto [Coach Greg Matterson].”

According to Newtown historian Glen Dwyer, Rudder’s mid-season signing was “somewhat of a fluke.” He had returned to Australia and was playing with the Southern Districts rugby union side after his stint with Japan’s Ricoh Black Rams had been curtailed by a cruciate injury.

“Tony Butterfield [Rudder’s Manager] contacted me because he could not get any of the NRL clubs interested in talking to Sean,” Dwyer says

“I met Tony and Sean at a café in Erskineville and shouted them lunch.”

“He was somewhat of a surprise signing . . . but he fitted in perfectly.”

For many modern NRL players, playing for Newtown might seem a step back in time, but not Rudder, who says the facilities at the club weren’t far off those used by the Newcastle Knights team with whom he won an NRL Premiership in 2001.

“When I played there [at Newcastle], we used to get our strapping done in an old shipping container near the uni,” he says with a laugh.

Rudder’s impact at Newtown cannot be understated. Playing mainly five-eighth and lock, the Singleton product was a driving force behind the Jets’ charge to the NSW Grand Final and had the honour of captaining the club in the infamous 104-minute slugfest against Wentworthville.

“The build-up was great but it was a bloody long game,” Rudder says with a laugh

“I think we saw some of the worst field goal attempts of all time too.”

Despite Newtown going down 12-8 in the decider, Rudder opted to retire at the end of the 2008 season due to a troublesome knee. However, despite balancing university commitments and a position as an assistant coach for Newtown’s SG Ball team, where he helped mentor the likes of Boyd Cordner, Jacob Miller and Jack Littlejohn, he very kindly reversed his decision midway through 2009 after the Jets suffered one of their worst starts to a season in modern history. With Rudder back steering the ship, the Jets rallied late and managed to just squeeze into the top eight despite being last midway through the season.

Rudder called it quits for good in 2009, and after a stint living in his native Hunter Valley, he moved down to Victoria where he lives with his partner and one-year-old.

“I’m into coffee and yoga these days,” he says.

“When I went back to Newcastle after playing, I saw a physio and they said Yoga and stretching would help with the tightness in my muscles caused by footy.

“As for coffee, my partner’s brother-in-law got me into that.”

Tune into tomorrow’s Virtual Season 2020 game to see Sean Rudder in action for the Jets against his former NRL club the Knights from 3pm at www.newtownjets.com and follow us on www.twitter.com/newtownrlfc.