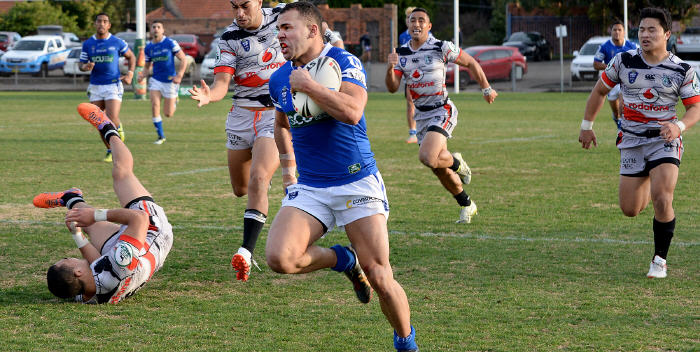 Report on the 21st Round VB NSW Cup match between Newtown and the New Zealand Warriors, played at Henson Park on Saturday, 1st August 2015 by Glen ‘Bumper’ Dwyer.

Both the Newtown Jets and the New Zealand Warriors were somewhat understrength in last Saturday’s 21st round NSW Cup match at Henson Park. The Jets needed to win to retain their eighth place on the competition table, while the Warriors were all out to maintain their position as joint competition leaders.

The Warriors flew from the starting blocks and posted three converted tries in the first twelve minutes to lead 18-0. The Jets steadied and with a better share of possession and territory pulled back through two tries to hooker Kurt Kara and one to backrower Tim Robinson, all of which were converted by Todd Murphy, to level the scores at 18-all going in to halftime. Fullback Daniel Abou-Sleiman had been involved in two of the Jets’ tries, the first when he cleverly tapped back a ball that was about to bounce across the dead-ball line for Robinson to score, and a second when his deft pass put Kurt Kara through a defensive gap on the Warriors’ tryline. Kara’s second try came from a well-judged grubber by Murphy into the opposition’s in-goal zone.

Jets coach Greg Matterson made it clear at halftime what his Jets needed to do to secure this win. They needed to shut down the Warriors’ off-loads, lift their own completion rate and to wear down the Warriors defenders through quick play the balls and enthusiasm. In effect, he told his players to keep right on with what they had done well in the second quarter of the game.

The second half might have provided plenty of thrills for the crowd with two tries scored by each team, but there was heartbreak for Jets fans with missed opportunities and erratic final execution in passages of play that should have ended in tries for Newtown. The Warriors pulled away to lead 30-18 with two converted tries but the Jets responded to the challenge and stormed back in the last fifteen minutes. Left-side wingman Corey Brown showcased his exceptional speed when he raced away for a long distance try in the 65th minute, and right winger Corin Smith scored from a high kick seven minutes out from fulltime. Todd Murphy’s final conversion attempt drifted slightly wide, and ultimately it was the Warriors’ impeccable goal-kicking (including two conversions from the sideline in the first half) that provided the two-point difference in the fulltime score of 30-28 in favour of the New Zealanders.

Some of Newtown’s better players on Saturday were among those who had been called up into the Jets’ line-up at late notice. The former Penrith junior and Sharks NYC squad member Myles Taueli made his senior debut for Newtown as a backrower and he showed considerable promise for the future. Young forwards Kurt Dillon and Tarek Elmasri also impressed, and fullback Daniel Abou-Sleiman looked more confident in the number one jersey. Centres Sami Sauiluma and Blake Ayshford caused lots of problems for the Warriors defence.

The Jets have been edged out of the top eight by age-old rivals North Sydney, and Newtown now goes into another vital match next Saturday (8th August) when they meet Wests Tigers at Leichhardt Oval. This match is timed for kick-off at 10.40am and will be televised live on Fox Sports One. The early kick-off time is because of Fox Sports’ NYC and NRL live television commitments in New Zealand later that day.