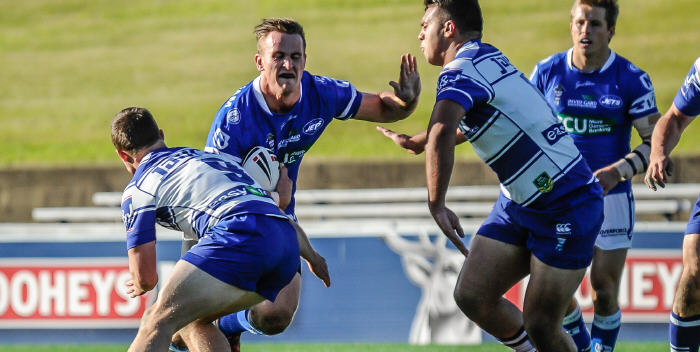 Experienced Newtown front-rower Andrew Pearn (with the ball) is having one of his best seasons with the Jets since joining the club in 2012. Photo: Gary Sutherland Photography.

Report on the 10th Round NSW Cup match between Canterbury-Bankstown and Newtown, played at Belmore Sports Ground on Saturday, 16th May 2015 by Glen ‘Bumper’ Dwyer.

Newtown fielded a less than full strength team against Canterbury-Bankstown at the Belmore Sports Ground last Saturday, as the Cronulla Sharks lengthy NRL injury list impacted upon the Jets team selections. The Bulldogs were coming off a heavy defeat against competition leaders Mounties on the previous Saturday and were looking to bounce back in this local derby.

The Jets made a bad start to the game, conceding three tries to Canterbury through bad defensive reads in the outside backs. The Bulldogs led 18-0 after as many minutes and had the majority of possession in that time. Newtown responded well by scoring three tries in the space of six minutes to pull back to trail by 18-16. Fullback Nathan Gardner scored Newtown’s first try, and winger Corey Brown scored the Jets’ second on the end of a quality backline sortie involving Dallas Wells and Mitch Brown. Veteran front-rower Ray Moujalli powered over near the southern end goal posts in the 31st minute, but Newtown’s momentum was reversed when the Bulldogs extended their lead to 22-16 just three minutes out from halftime.

In contrast to the first forty minutes, there were to be relatively few points scored in this game’s second half. Newtown scored in the 46th minute when winger Nesiasi Mataitonga crossed in the corner after the ball had moved through several pairs of hands. Nathan Gardner’s conversion from the sideline tied the scores up at 22-all and his penalty goal in the 57th minute gave Newtown the lead for the first time in the game.

The result slipped away from Newtown in the final quarter as the Jets failed to build on their 24-22 lead. Canterbury took advantage of what appeared to be disorganised Newtown defence after Mataitonga had been forced from the field with a knee injury. This unconverted try gave the Bulldogs a 26-24 lead which they held onto until fulltime.

Newtown took some poor kicking options late in the game and there were some missed attacking opportunities and misdirected passes inside Canterbury’s twenty metre zone. Jets coach Greg Matterson observed that these were two valuable competition points to lose, especially as the team had gone close to winning after several selection changes had been made leading into this game. Andrew Pearn and Ray Moujalli had been prominent in the forwards for Newtown and Mitch Brown was the best of the backs.

The Jets now face up to an opponent who recorded a resounding 10th round victory after being trounced on the previous weekend. Newtown journeys along the M4 to play Wentworthville at Ringrose Park next Sunday, 24th May, at 3.00pm. There were other unexpected results in the NSW Cup on this past weekend, with the top three teams all losing to clubs further down the competition table.