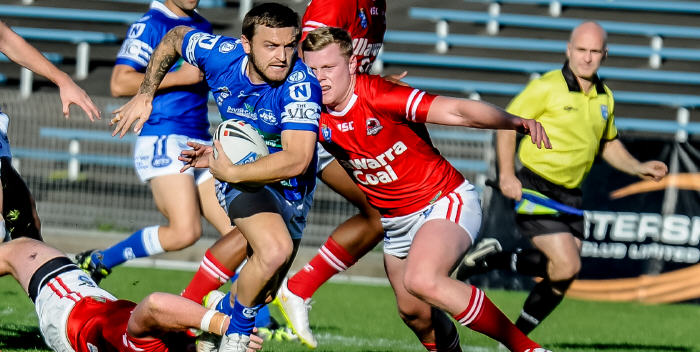 Nathan Gardner caused plenty of problems for Illawarra last Saturday. The Jets will be hoping for a repeat performance against the Bulldogs this weekend.

Newtown Jets has named its team for the VB NSW Cup Round 10 clash versus Canterbury-Bankstown Bulldogs being played at Belmore Sports Ground, Saturday 16th May, 3pm kick-off.

Get to Belmore on Saturday from 11am to cheer on Cronulla Sharks’ Harold Matts & SG Ball teams in the National Junior Rep Finals.

After the euphoria of their Grand Final victories last weekend the Sharks Matthews Cup and SG Ball teams have the chance to create more history when they contest National Championship matches on Saturday.

The Matthews Cup Sharks were outstanding in beating the Eels 30-16 last weekend, while in the SG Ball decider it was again the Sharks, this time to the tune of 24-16 over the South Sydney Rabbitohs.

The Matthews Cup victory was the fourth in the history of the Cronulla club, the last win coming back in 2001, while it was the first-ever triumph for the Ball Sharks in the NSWRL under-18’s competition.

David Howlett, the coach of the victorious 2015 Cronulla Sharks SG Ball Cup team, played with Newtown between 1997 and 2001.

Courtesy of their wins, the Sharks now move on to contest National Finals against the Queensland champions the Townsville Stingers who like the Cronulla club were successful in taking out both their state age group titles.