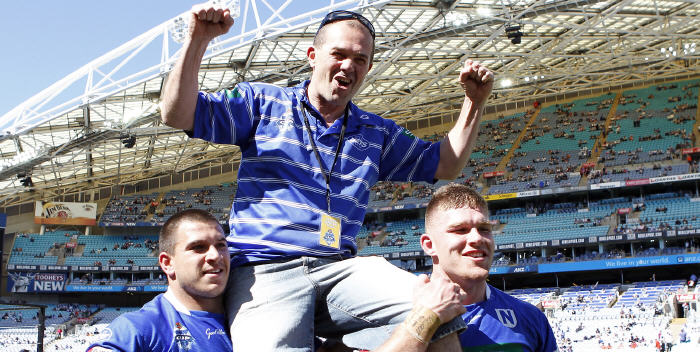 Newtown’s head coach Greg Matterson will be in charge of the Jets for the 200th time in the NSW Cup/Intrust Super Premiership NSW this Saturday.

Greg was appointed as the club’s NSW Cup head coach in 2008 and he has steered the Jets to a premiership in 2012 and a Grand Final in 2008, as well as several other finals appearances. To reach 200 games as head coach with the one club in what is a high standard, senior level of Rugby League is an extraordinary achievement and we all wish him well in his 9th season as head coach with the Newtown Jets. His coaching record prior to this Saturday is: 199 games for 109 wins, 8 draws and 82 losses.

This Saturday’s away game at Cessnock to the Newcastle Knights will be a difficult assignment. The Jets have not won an away game in Newcastle or the Hunter region since 2008 – but this Saturday seems to be as good a time as any to smash this non-existent hoodoo!

Newtown’s team for this Saturday is:

Follow the game’s progress on Saturday on the Newtown Jets social media:

Here are all the Intrust Super Premiership (ISP) teams for Round Two: http://www.nswrl.com.au/content/nswrl/club/news/2016/03/08/teams_intrust_super_.html

The NSWRL has produced The Wrap, a well-compiled round-up of all the news and views within the ISP NSW: http://www.nswrl.com.au/content/nswrl/club/news/2016/03/10/the_wrap_round_1.html

And the NSWRL has also compiled this highlights package of Round One of the ISP: http://www.nswrl.com.au/content/nswrl/club/news/2016/03/09/highlights_isp_rd_1.html

Once again the Newtown Jets have received excellent coverage in this week’s Cooks River Valley Times (on pages 15 and 16) : http://bit.ly/1TvNPIW

And the Cessnock Advertiser has let its readers know all about Saturday’s Knights-Jets ISP NSW clash: http://www.cessnockadvertiser.com.au/story/3776867/knights-juniors-reserve-grade-games-at-cessnock/?cs=460

The 2016 Rugby League season is well and truly with us, and the best way you can show your loyalty and support to Australia’s oldest Rugby League is by becoming a 2016 member by either joining up or renewing your membership. Revenue from annual memberships is a critical aspect of our club’s revenue stream. Please go this link to make your choice of 2016 Newtown Jets membership packages: http://www.newtownjets.com/jets-membership-2016/

The Newtown Jets have been rated as the greatest Hipster Club in the world of Rugby League, edging out some rather raffish Rugby League clubs in cities like New York, Toronto and London. Make sure you have some of your own cutting-edge Jets clothing and merchandise – go to: www.newtownjetsclothing.com.au to make your selection (naturally you can make your purchases online). (SOURCE: Bumper’s JETS Newsletter)