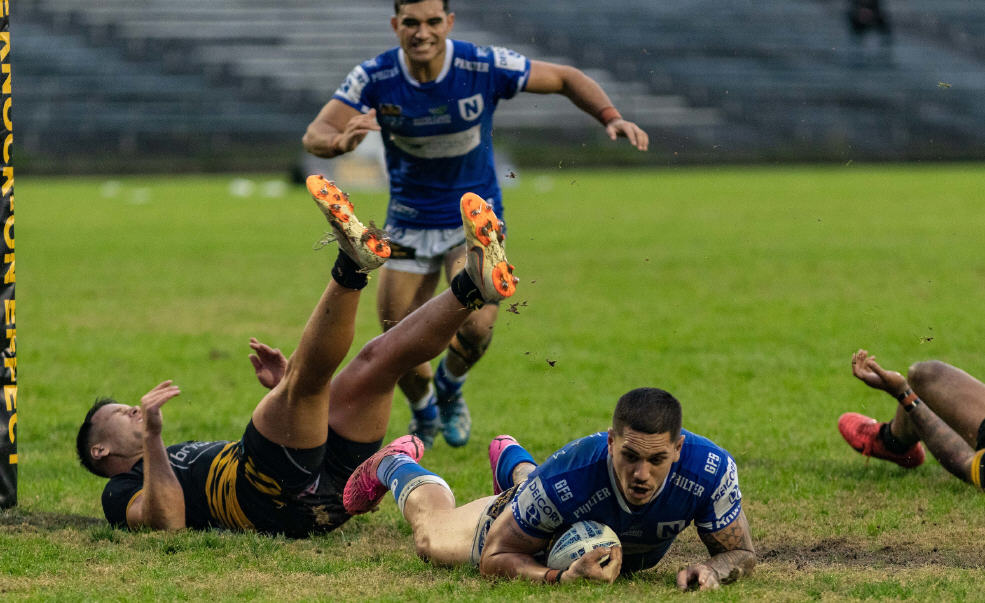 TRY TIME! Jets colossus Myles Taueli crashes over for the icing on the mud-cake, much to the delight of Newtown’s “Mr Fix-it”... Tyla Tamou. Photo: Mario Facchini/mafphotography

Jets in hard-earned win over Mounties

Despite the difference in their places on the NSW Cup competition table, the Newtown Jets were made to work hard for their 26-12 win against Mounties on Saturday.

The Jets led 10-6 at half-time and only made sure of their victory late in the game in the Round 11 Knock-On Effect NSW Cup match played at Henson Park.

Backrower Reubenn Rennie opened Newtown’s account with a determined run to score in the 18th minute, with the try being converted by fullback Mawene Hiroti.

In the 30th minute Jets centre Kayal Iro won the race to ground the ball that had been grubber-kicked into Mounties in-goal, following a high speed Jets passing movement down the left side.

A 40/20 kick by Mounties put them in a strong attacking position at Newtown’s end, and the visitors made use of this field position to score late in the first half to trail 10-6 at half-time.

Jets coach Greg Matterson warned his players that Mounties would be desperate to score further points in the second half in their quest to get away from the bottom end of the NSW Cup competition table.

A penalty to Mounties at Newtown’s end early in the second half followed by an enforced goal-line drop-out saw Mounties add a converted try and take a 12-10 lead in the 48th minute.

The game was very much in the balance as Mounties applied extended attacking pressure at the Jets end, but Newtown’s defence held solid. Hooker Jayden Berrell and Kayal Iro combined well for Iro to claim his second try for the Jets to regain the lead by 14-12.

The game was played in genuine wintry conditions with rain falling in the second half and with the floodlights turned on.

Five-eighth Tyla Tamou cleverly stepped through the Mounties defence to score in the 60th minute, and Hiroti’s conversion gave the Jets a slightly safer 20-12 margin.

Backrower Myles Taueli, back in action after several weeks absence due to injury, secured Newtown’s win with a barnstorming try in the 79th minute. Hiroti’s conversion made the fulltime score 26-12.

Coach Matterson was very impressed with the performance of the Newtown forwards in the second half. The Jets were fielding a less than full strength side and the Jets forwards had defended for several sets against Mounties when the pressure was really on in the second half.

Matterson rated Newtown’s best forwards as being Caleb Uele, Liam Harris, Reubenn Rennie and Myles Taueli. Tyla Tamou and Kayal Iro had been the best of the backs.

The Jets remain in second place on the NSW Cup premiership table, and their next match is against Western Suburbs at Lidcombe Oval on Sunday, 29th May at 3.00pm.

Weather: 18 degrees, overcast, rain seemed likely. (Rain did fall in the second half).

The floodlights were turned on the second half.

Coach Greg Matterson described this as a very valuable win with what was a less than full-strength side.

The Newtown team had been under great pressure from Mounties for extended periods in the second half and had repeatedly defended their line.