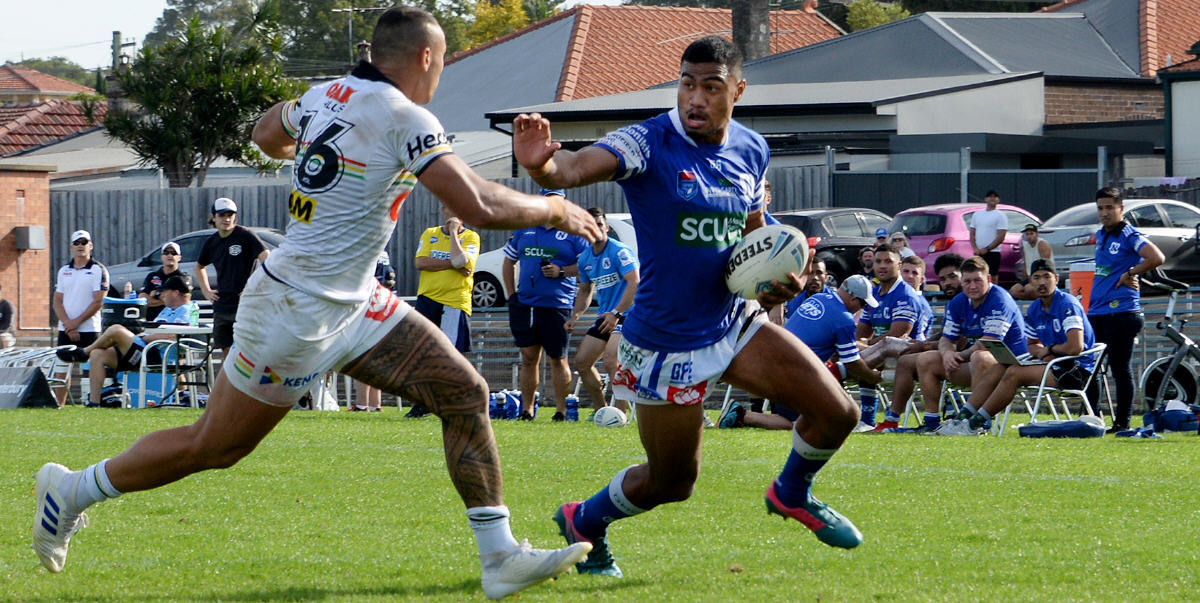 Newtown Jets centre Ronaldo Mulitalo is try-line bound as he fends off a Penrith Panthers opponent in the last minute of play at Henson Park on Sunday. Photo: Michael Magee Photography.

Jets in narrow loss to Panthers

The Newtown Jets were narrowly beaten 18-16 by the Penrith Panthers in the sixth round Canterbury Cup NSW fixture played at Henson Park on Easter Sunday afternoon.

Newtown’s third and final try was scored in the final minute of play, with the time clock effectively preventing any chance of a belated Jets victory.

The Panthers had led 12-0 at halftime and looked to be well in command when they opened up an 18-4 lead with about fifteen minutes remaining.

Newtown had scored the first try of the second half when winger Isaac Lumelume pounced on the ball in pursuit of a well-flighted kick into the Panthers’ in-goal by five-eighth Kyle Flanagan. Halfback Braydon Trindall dashed over eight minutes out from fulltime and centre Ronaldo Mulitalo scored wide out in the final minute of the game.

The warm autumn weather took its toll on both groups of players, with both the Jets and Panthers team members making a lot of errors in the match. Penrith had the majority of possession during the game and spent a lot of time in Newtown’s half. The Jets defended gamely on their own line for extended periods, but in truth there were some rather dour spells of play in both halves of the match.

The Newtown Jets play the Western Suburbs Magpies in round seven of the Canterbury Cup NSW at Lidcombe Oval next Sunday, 28th April, at 1.10pm. This will be another Channel Nine televised game.