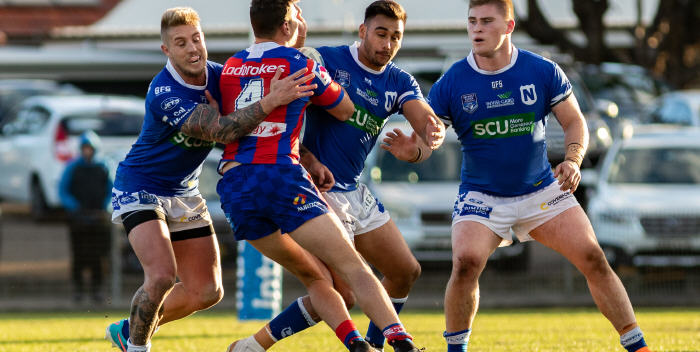 Newtown Jets players (from left) Aaron Gray, Briton Nikora and Daniel Vasquez have this Newcastle Knights player bailed up in a match at Henson Park in 2018. Photo: Mario Facchini, mafphotography.

Jets intend to put indifferent trial match form behind them

The Newtown Jets go into their opening round Canterbury Cup NSW match against the Newcastle Knights this Friday, 15th March, after a rather average series of trial matches. The Canterbury Cup NSW is the new sponsorship title for the flagship competition of the NSW Rugby League, with the previous sponsor Intrust Super not renewing its contract.

Newtown’s head coach Greg Matterson is heading into his twelfth season with the Jets and is well accustomed to moulding a competitive playing unit in a short space of time. As Matterson noted, Newtown is in partnership with the NRL club Cronulla Sharks and the composition of the Jets’ team doesn’t fall into place until the first competition round. The trial games provide the opportunity for Newtown’s own roster of registered players to compete for places in the starting line-up for round one of the Canterbury Cup NSW.

Matterson also observed that there could be some surprise inclusions in the names on the Newtown Jets team sheet when the seventeen players for round one are announced later this week. The Jets play the Newcastle Knights this Friday, 15th March, at McDonald Jones Stadium (Newcastle) at 3.45pm.