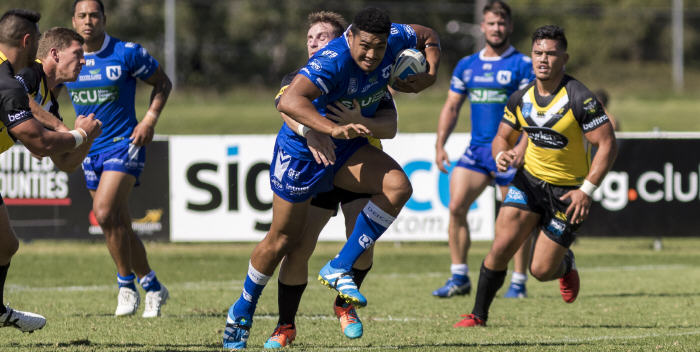 Newtown Jets front-rower Malakai Houma in full cry against Mounties last Saturday prior to his suffering what will probably be a season-ending leg fracture. Photo: MAF Photography

The 2017 Intrust Super Premiership took a turn for the worse for the Newtown Jets in their second round away game against Mounties last Saturday. The Jets were punished for several bad defensive reads and were decisively beaten by the Canberra Raiders partnership club 46-28. Bad injuries to key players during the course of the game added to Newtown’s problems.

The Jets went into this match with a substantially different team line-up to that of the previous weekend. Several Cronulla NRL players who had reinforced the Jets in round one were on duty with the Sharks in Canberra, plus there had been other team changes due to injury and suspension.

Newtown began Saturday’s game in great style with front-rower Kurt Dillon scoring under the posts in the second minute, on the back of an elusive midfield dash by hooker Manaia Cherrington. Mounties quickly seized the ascendancy and went into halftime with a 24-10 lead. The Jets tackling in their own quarter had been fragile and the powerful Mounties forward pack took full advantage of these defensive lapses.

The Jets scored the first try of the second half and proved they had the attacking ability to challenge the Mounties defence, but the home team added another four tries to hand out a trouncing. Newtown scored five tries against a team that is likely to be one of this competition’s front-runners, but their poor decisions in defence presented Mounties with easy scoring opportunities. No doubt defensive drills will be an aspect of play that will be worked on doubly-hard at training this week.

Injuries during last Saturday’s game will definitely have some impact on the team’s future prospects. Halfback and playmaker Daniel Mortimer (knee), front-rower Malakai Houma (serious leg injuries that will probably sideline him for the season), and Kurt Dillon (back) all had to leave the field during the game.

The Jets are on the road again this Saturday, 18th March, when they travel to WIN Stadium, Wollongong to take on the reigning ISP NSW premiers, Illawarra. This round three match will commence at 3.00pm.