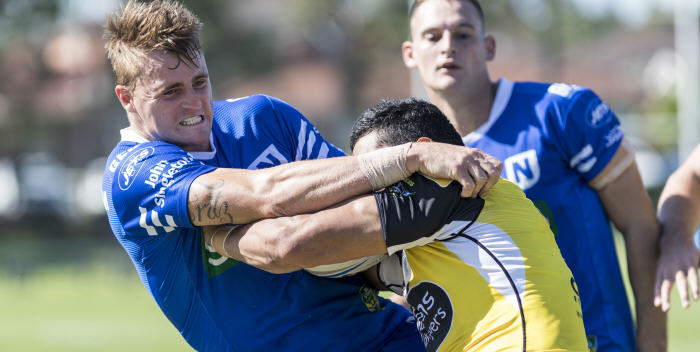 The Newtown Jets have an appointment with the defending national second-tier champions at WIN Stadium, Wollongong tomorrow.

Illawarra won last year’s Intrust Super Premiership NSW title and also the Intrust Super National Championship playoff, and they will host the Newtown Jets at WIN Stadium, Wollongong on Saturday afternoon, 18th March. Both teams have won one ISP NSW game this season and lost one, and they will be extra keen to take the two points on offer. Tomorrow’s team lists for both clubs read very differently to the sides that staged such a ferocious showdown in the pouring rain in last year’s thrilling preliminary final.

Please note that the Illawarra RLFC is no longer sponsored by Illawarra Coal and the nickname Cutters has been discontinued.

Today is the 17th March, so it’s a Happy St Patrick’s Day to everyone linked in any way to the Newtown Jets. There wouldn’t be many other rugby league clubs where there has been a greater Irish influence in the ranks of its players, officials and supporters over 110 years. Surnames like Hyde, Farrell, Cahill, Daly, Moore, Sullivan, O’Connor, Kelly and Murphy spring to mind along with so many more surnames drawn from the Land of Saints and Scholars.

Here are the statistics from last Saturday’s Mounties-Newtown match:  http://www.nswrl.com.au/content/dam/nswrl/documents/isp-stats-reports-2017/Rd2-MountiesJets.pdf

Just in case you missed this interview with the Newtown Jets head coach Greg Matterson:  http://www.nswrl.com.au/news/2017/03/09/coaches_corner_greg_.af_intrust-super-premiership-nsw_news1.html

Here is a complete online guide to the 2017 ISP NSW season produced by the NSWRL:  http://www.nswrl.com.au/content/dam/nswrl/documents-2017/NSWRL%202017%20Season%20Guide_OnlineV1.pdf

The 2017 Intrust Super Premiership NSW competition is now underway, in what is Newtown’s 110th season in rugby league football. There’s no better way you can prove your support for the oldest club in Australian rugby league than by taking out a 2017 membership package. There are membership deals on offer to suit all personal circumstances and budgets. Check out this link for all the relevant information:  http://www.newtownjets.com/jets-membership-2017/