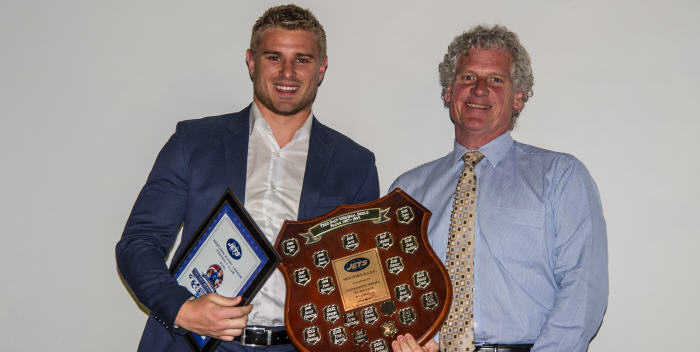 Jets salute what was a most satisfactory 2016 season

The Newtown Jets held their annual Presentation Dinner at the Petersham RSL Club on the evening of Wednesday, 5th October. There was a good crowd in attendance of club members, supporters, sponsors as well as staff and players. David Trodden and Barrie-Jon Mather from the NSW Rugby League were two special guests.

A feature of the night was the fact that the Jets’ NRL partnership club, the Cronulla-Sutherland Sharks, had won their inaugural NRL premiership title on the previous Sunday (2nd October) and there were frequent references to this glorious day in their partnership club’s history. The Jets might not have won the 2016 Intrust Super Premiership NSW Grand Final, but they had a highly respectable season. They were eliminated at the preliminary final stage in a narrow defeat to the Illawarra Cutters.

The Cutters went on to claim the ISP NSW premiership title, and then overwhelmed the Queensland Cup premiers Burleigh Bears in the NRL State Championship final at ANZ Stadium on the NRL Grand Final Day.

Several speakers at the Newtown Jets Presentation Dinner mentioned that this 2016 playing group had gelled together very well and had formed a remarkably strong esprit de corps. It is a recurring feature of a second-tier rugby league competition such as the ISP NSW that there always is a significant turnover of players each year. This year’s group of Newtown players formed a strong bond and made a very spirited showing in challenging for the ISP NSW premiership title. The CEO of the NSW Rugby League, Mr David Trodden, said that the Newtown club is a highly valued member of the ISP NSW competition, and the Jets’ crowd-pulling capacity, their successful media profile and merchandising campaigns are an example to all the other second-tier rugby league clubs.

Kurt Capewell won the blue-ribbon Brian Moore Shield which is awarded to the Newtown Jets best and fairest award winner. Capewell turned in a succession of top class performances as a backrower and centre with the Jets and deservedly won NRL selection with the Sharks in the latter part of the season. Five-eighth Josh Cleeland won the best back award and he will be a great gain for the Canterbury Bulldogs in 2017. Hooker Matt McIlwrick proved himself to be a quality rugby league personality on and of the field and he won the coveted Fred Daly Memorial Shield, which is awarded to the player deemed to have made the greatest contribution to the club in the past season. McIlwrick will be joining Wests Tigers in 2017 and everyone at the Jets and Sharks wishes him well for the future.

Other major award winners included Gary Sutherland, who won the Club Person of the Year award in recognition of the high standard photographic services he has provided over the past 13 years.

Newtown Jets coach Greg Matterson was honoured by the club for having passed the 200 games benchmark as a coach at the Jets. He first joined the club as the Jim Beam Cup coach back in 2005 and has been the NSW Cup and ISP NSW head coach since 2008. Matterson also paid tribute to the playing group of 2016, the club Directors, team staff, sponsors and supporters who all work together to maintain the oldest club in Australian rugby league as a viable and successful operation.

It will all get underway again for the Newtown Jets in early November as they start preparing for the 2017 rugby league season.

Fred Daly Memorial Shield (for the player who has contributed most to the club on an off the field) – Matt McIlwrick.