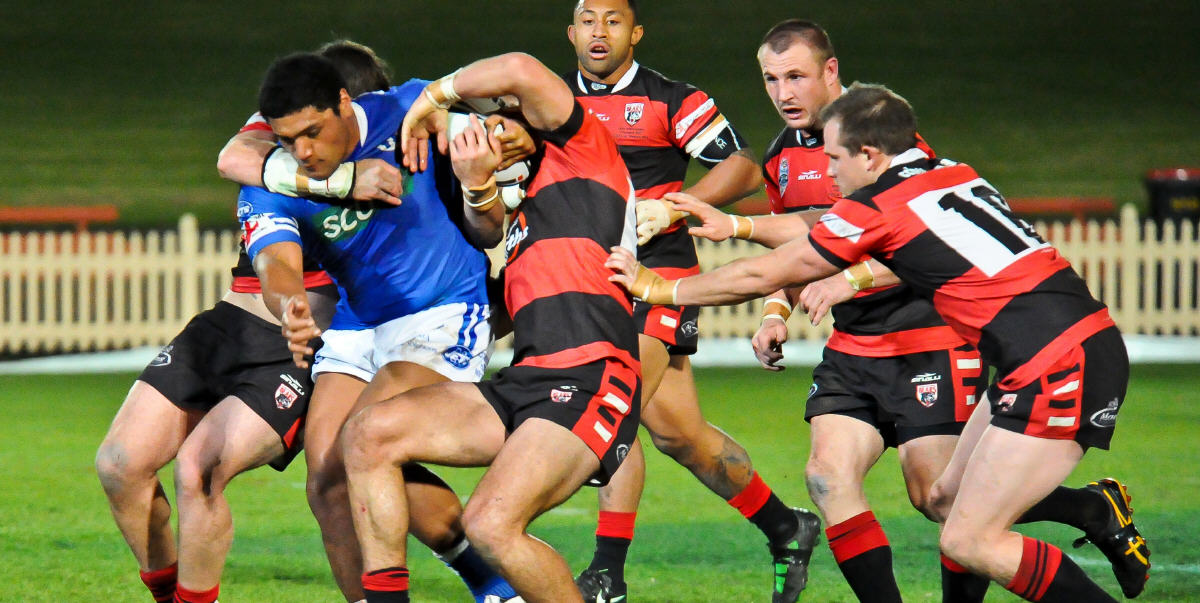 Jets take a point but lose the Shield

How it played out

The Newtown Jets overcame a combination of late team changes, cold and windy playing conditions, and (almost) the full force of the competition leaders, in drawing 16-all with Norths at North Sydney Oval on Friday night.

It was a great developmental experience for Newtown’s young players who stood up to be counted on a night when the odds were very much against them.

The Jets had marginally the better of the first half and led 6-4 at the break. The Bears ran up a 14-6 lead early in the second half and looked to be about to open up a strangle-hold on the match.

The young Jets fought back to lead 16-14 and both teams swapped unsuccessful field goal attempts in the hectic final stages of the game.

Many challenges for the Jets

Newtown had several team changes from the previous weekend, with three players receiving call-ups into the Roosters’ NRL ranks and a fourth player unavailable due to emergency family circumstances.

The North Sydney CBD was most certainly not exempt from Sydney’s savage winter weather and a freezing southerly blew straight down the historic old oval all night.

Second-rower Blake Williamson scored for Newtown in the game’s sixth minute when he showed great strength and determination as he wrestled his way through several Bears defenders. Mark Kheirallah converted from wide out despite the difficult kicking conditions.

The Bears scored an unconverted try midway through the first half but Newtown maintained their narrow 6-4 lead to the break.

Jets coach Greg Matterson praised his players at halftime for their resolution in defence but called for more variety in their end of set options.

Repeated high kicks into the corners couldn’t work in such windy conditions and he urged his players to maintain their work rate and continue to take the game up to their more highly-rated opponents.

Norths looked set to run away with the game when they scored two tries in rapid succession early in the second half but the Jets regrouped and managed to keep the Bears at bay for the remainder of the third quarter.

Front-rower Josh Ailaomai, one of Newtown’s best on the night, crashed over under the scoreboard-end goal-posts in the 20th minute and Kheirallah’s conversion saw Newtown back in the match at 14-12 down.

Quick hands through the Jets backline put winger Daniel Tupou in for his 19th try of the season and Newtown into the lead at 16-14.

One of the highlights of the second half was the great chase and try-saving tackle by Jets five-eighth Jack Littlejohn after a grubber kick at Norths’ end had miscued.

The Bears equalised with a penalty goal with five minutes left to play and both sides attempted field goals in the thrilling final minutes.

North Sydney claimed the Frank Hyde Shield on a points for and against basis (having beaten Newtown 26-22 on the 5th May) and several members of Frank’s family were on hand for the match and the trophy presentation.

The Jets coaching staff were unanimous in their praise for Newtown’s determination and spirit but felt that the two points had been there for the taking. A smarter kicking game might have brought about a better result, especially if the Bears had been forced into conceding repeat sets and to defend on their own line for longer periods.

Utility forward Kurt Kara deserves special mention for his willingness to play in the centres at short notice and for turning in an efficient display.

One Newtown supporter summed up the performance quite simply – “They done good” – and another rang to say “They were magnificent, given the team changes, the cold, the wind and the quality of the opposition.”

Newtown’s team was (with the 2020 sponsors in brackets):

With the return of NRL live matches on Saturday afternoons this coming weekend, our intrepid social media team is going full-on “Amco Cup retro-style” and will now show you the Newtown Jets Virtual Season 2020 games on Wednesday nights at 8.00pm.

Next Wednesday, 3rd June they’re travelling to the foot of the mountains to bring you a momentous 2016 NSW Cup Elimination Semi-Final encounter between the Newtown Jets and NZ Warriors in a match that was actually played on Sunday, 11th September 2016.

Newtown went into the game as underdogs as it was expected that the Warriors with the larger number of players with NRL experience would overpower the Jets. So be sure to tune in at 8.00pm, Wednesday, 3rd June to JETS TV www.newtownjets.com or www.facebook.com/newtownrlfc  and follow us on www.twitter.com/newtownrlfc to see what unfolds.

Please keep spreading the word for our Keep The Jets Flying Campaign.
The willingness and generosity of our members, supporters and friends to join this critically-needed fund-raising campaign has been awe-inspiring. There is always room for more intrepid entrants to join this mighty crusade to keep the Jets alive in rugby league football.

Another way you can Keep The Jets Flying into the future is donate to the Laps With Trady campaign.

This fundraiser has been set up by a group of members and supporters and features the Catweazle-like John Trad doing laps of Henson Park on his trusty penny-farthing bicycle every Saturday.
Check out:  https://www.facebook.com/Laps-with-Trady-100545721662756/ for all the details plus read a great feature by SJ Stark for Contrast Media https://contrastmedia.com.au/f/we-are-8972

You can help Trady and the Jets keep flying by donating to Laps With Trady via Newtown Jets’ Sydney Mutual Bank account BSB 611 001 Account No. 10024 3173 REF: Laps, which is exactly what Royal Blue Legends Club Member #255 Dave Nelson did this week to the tune of $1,000! Dave you are indeed a Royal Blue Legend!