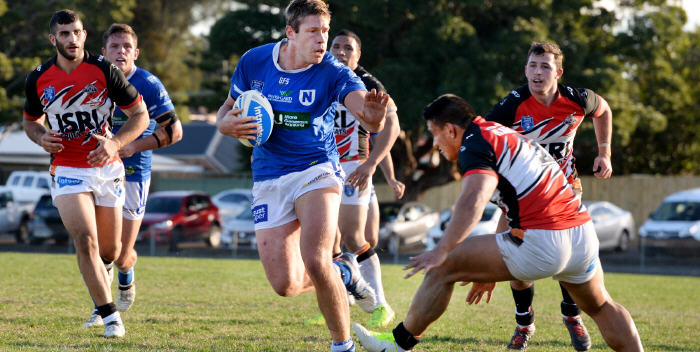 Newtown front-rower Jeremy Latimore was rated as one of the Jets best forwards on Saturday. Photo: Michael Magee.

Lady Luck turns a blind eye to the Jets

Good fortune was somewhat scarce for the Newtown Jets on Saturday when they went down 18-12 to Wests Tigers at Henson Park. The teams were locked up at 6-all at half-time, and the Jets paid a heavy price for repeated errors in the final twenty minutes.

Five-eighth Luke Jurd (from the Cronulla Sharks Holden Cup squad) was named to make his senior rugby league debut with Newtown on Saturday, but suffered a leg injury in the pre-game warm-up and had to withdraw. Jets fullback Matt Evans, who has been in career-best form this season, was having a strong game but left the field early in the second half with a dislocated elbow. Big Saulala Houma appears to be struggling with a leg injury and took very little part in the game. Coach Matteson summed up the overall tone of Newtown’s afternoon in saying that there was no lack of effort and courage by his players on Saturday, but their repeated errors in the last twenty minutes brought the team undone.

The Newtown RLFC extends best wishes to Daniel Mortimer, who travels to England this week to take up a contract with the Leigh Centurions (https://leighrl.co.uk/wp/) in the UK Super League. Daniel acquired virtual cult status in his time with the Newtown Jets, and he will be forever remembered for his outstanding contribution to Newtown’s 2012 NSW Cup premiership victory. Godspeed, Daniel – you will always receive a warm welcome back at Henson Park.

Newtown kicked off, running to the northern end.

Newtown spent most of the first ten minutes in Wests Tigers half but were unable to break through to score.

11th min: Midfield penalty to Newtown proves useful. The ball was worked to the right , Matt Evans dummied and cut through to score 10 metres in from the north-east corner. He converted his own try.

Good defence by Wests Tigers on their own line, midway through the first half.

22nd min: Jeremy Latimore chip kicks ahead, regathers and goes very close to scoring – not often seen from a front-rower!

26th min: Try to Wests Tigers. Heleta is the try-scorer and it is converted by Mapesone. 6-all after 27 mins.

Wests Tigers not adverse to a couple of late shots that weren’t picked up by referee and touch judges.

Good Newtown attacking opportunity in 31st min is wasted by a forward pass.

Jets do well to shut down a strong attacking raid by Wests Tigers in 32nd min.

Jack Williams goes close to scoring in the 35th min.

Newtown looking a bit vulnerable up their right-side defence.

Matterson calls on players for greater effort in second half. This game will be won by the team that most wants to win. Discipline and energy needed in second half.

Matt Evans is off with a dislocated elbow early in the second half.

Leigh Higgins has gone to fullback and Kurt Kara to five-eighth.

Try was scored in the south-western corner.

Jets lose the ball from a high Wests Tigers kick in 9th min.

It looked like Jesse Ramien had been tackled in mid-air, but there’s no penalty.

61st min: Well worked play as Wests Tigers Jackson Williams runs on to a short ball from Jack Littlejohn and scores under the posts.

Great carry by James Tuitahi as he takes the ball out from his own tryline to the 40 metres line, but loses the ball in a tackle (66th min)

Grubber kick by Littlejohn into the in-goal is well weighted and Milone scores.

Jesse Ramien and Edrick Lee exchange passes, and Lee races to the tryline and veers inwards to get closer to the goal-posts – and is prevented from grounding the ball by a Wests Tigers defender.

Lee is adamant later that he grounded the ball.

Penalty to Wests Tigers for Jets pass off the ground wraps up proceedings.

Too much dropped ball in the back end of the game.

Great effort and courage shown by Newtown players but the frequent errors in the last twenty minutes brought the Jets undone.

This match will be televised live on Fox Sports