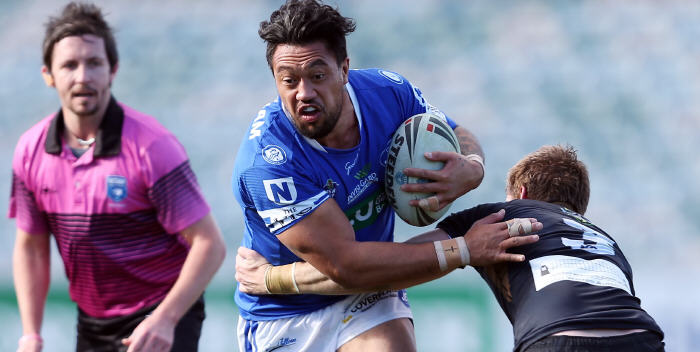 Report on the 19th Round NSWRL VB NSW Cup match between Mounties and Newtown, played at the GIO Stadium, Canberra on Saturday, 18th July 2015 by Glen ‘Bumper’ Dwyer.

Another late flurry of try-scoring by the Newtown Jets wasn’t enough to salvage the result against Mounties at GIO Stadium (Canberra) on Saturday. The Jets trailed the Canberra Raiders NSW Cup partnership club 16-4 at half-time, and Mounties took their opportunities to extend this lead to 30-4 midway through the second half. The Jets came home with a wet sail and scored four tries in the last twelve minutes to narrow the deficit to 30-24, but the full-time siren put paid to their gallant quest.

Newtown paid the price for some poor defensive reads and missed one on one tackles in the first half, and Mounties’ surplus of possession kept the Jets under pressure. New signing Corin Smith scored Newtown’s first points in the 36th minute after Todd Murphy had put a kick in behind the Mounties defensive line. Mounties line speed in defence had been a decisive factor in the first half as they rushed up and pressurised the Newtown ball players.

Jets head coach Greg Matterson at half-time called for his players to reclaim the rucks and to put the acid back on their opponents. The second half began in the worst possible manner for the Jets, with Mounties scoring near the posts from a high kick in the 43rd minute. They then added two more tries to lead 30-4 with 18 minutes left to play.

The Jets eventually showed the nationwide Fox Sports television audience what they were capable of, with four well-worked tries through keeping the ball alive, keen support play and determined finishing. Corin Smith collected his second, and Todd Murphy and Sami Sauiluma added tries in quick order. Dallas Wells scored a spectacular diving try in the last minute but the full-time siren ended the game before play could be restarted.

This loss leaves Newtown with a somewhat precarious hold on 8th place on the NSW Cup premiership table, with games against two of the competition’s top four in the next two rounds. Front-rowers Saulala Houma and Ray Moujalli and second-rower Tinirau Arona impressed on Saturday with their determined drives and their metres gained, while Todd Murphy did his best to spark the Newtown attack. Winger Corin Smith has performed well after joining the Jets mid-season from the Mudgee Dragons.

The Jets travel to the northern end of the Central Coast this Sunday (26th July), when Newtown plays away to Wyong at the Morry Breen Oval. This 20th round NSW Cup fixture is timed to commence at 3.00pm.