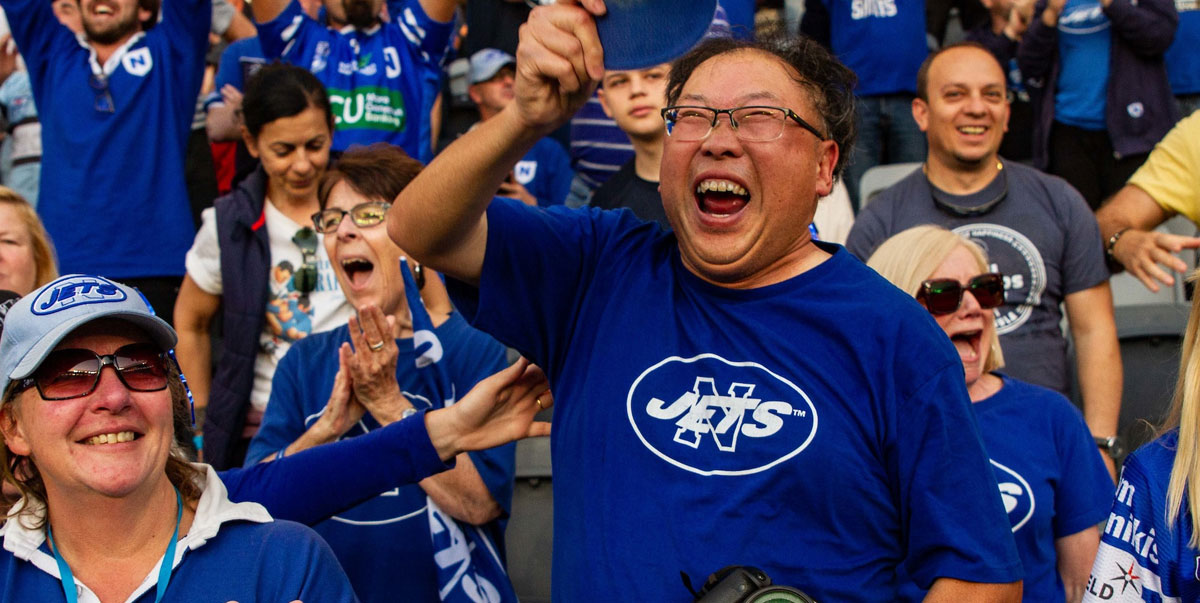 If you’re a rugby league fan, you’ve probably seen Wayne Leong before. He’s the bloke who stands in the Chook Pen at Roosters games with the famous ‘Giggity, Giggity’ sign. What you may not know though is that Wayne is also a dedicated Newtown fan and member #332. We caught up with Wayne to find out what he loves about being a Bluebag.

How long have you been coming to Newtown games for?

Probably since about 2008 or 2009, I started going when the Roosters and Jets had a partnership. I didn’t go very often at the start, I think it took a little while to warm to the idea.

You pretty much attend every game now, though. What turned you into such a dedicated fan and member?

The more involved I got, the more I liked the club. Newtown were very inviting as a club and were always really welcoming to Roosters members. Both the players and officials were always open to chat. Board member Terry Rowney was always out on the hill having a chat with people and would actively encourage the players to chat with fans, too. It’s probably a bit hard to do this anymore because of COVID, but another great thing was that win, lose or draw, the players would always come to the fence and chat to the fans

You’re obviously a fanatical Roosters supporter, how does the atmosphere at a Jets game compare to that of a NRL fixture?

It’s very different. At the Roosters game you’re at a much bigger stadium and there’s generally a lot less crowd interaction with the players because it’s a much bigger organisation. Newtown is definitely a lot more relaxed and casual, which I like. I’ve been a Royal Blue Legends Club Member for a few years and although that lets me into the Jet Set Lounge, I prefer to go sit on the hill or down in front of the grandstand due to the atmosphere.

Have you met many people through Newtown?

Yeah, met quite a few people actually. There have been quite a few Roosters fans who have come across because of the partnership and they’ve stayed along for the ride. I’ve also made friends with a couple of serious Newtown diehards too.

Newtown really is a very social club, there is a group of about half a dozen of us who sit together at away games. We often get together and have something to eat before the game and also stay in contact during the off-season, too.

What’s the furthest you’ve ever travelled to see a Newtown game?

I’ve been to Auckland to watch the Jets, at Mt Smart, Auckland and Walter Massey Park in the suburb of Mangere. The facilities weren’t amazing for the players at Walter Massey, I saw a player get stitched up on a table on the sidelines, but the locals were really friendly and I think that’s part of the experience. It felt very real.

What do you think is your favourite memory of being a Jets member?

The 2012 premiership was pretty spectacular. Just the run the side went on to claim the premiership from seventh was amazing. And the atmosphere was superb too! I remember Ahmad Ellaz had a lot of mates come to the games and they would always bring these drums. They certainly made things a lot more animated.  2019 was obviously pretty spectacular too, but I have another great memory from 2014 from when he played at Mt Smart No.2 when the Jets came back from a massive deficit to beat the Warriors, we made a lot of noise that day.

Why would you recommend becoming a Newtown member?

Turn up to a game on a sunny Saturday afternoon bring the kids and dogs and you’ll see why. It’s real rugby league and everybody is really friendly and the kids kick the ball around before the game and at halftime.