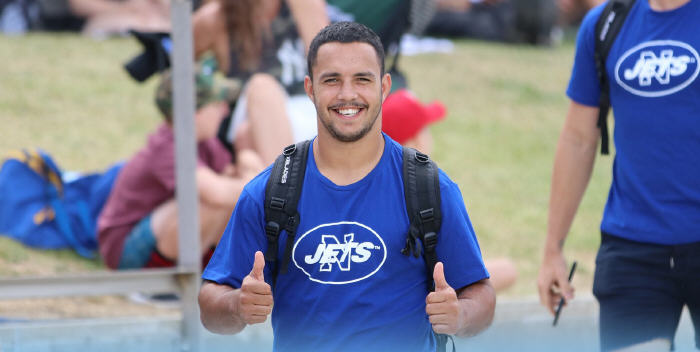 Newtown’s halfback, Braydon Trindall (a Wee Waa junior and a key member of the 2018 Cronulla Sharks Jersey Flegg premiership team) looks to be in good spirits as the Jets squad arrives for their final trial match at the Maitland Sportsground on Saturday. Photo: Cronulla Sharks Media Team.

Fielding a team boasting a number of the Sharks full-time NRL squad members, the Newtown Jets went down to the Newcastle Knights in their trial match played at the Maitland Sportsground on Saturday, 2nd March.

The Jets scored first but it was largely one-way traffic from that point, with the Knights registering a comfortable 26-12 victory.

The match began with an awful error from the Knights fullback, a mistake which gifted the Jets their first points. Jets fullback Luke Polselli on the spot to claim the ball and plant if down for the opening try.

Braydon Trindall added the extra two points and it was 6-0 to Newtown eight minutes into the contest.

The Knights worked their way back into the game, with a fortuitous try to front rower Jirah Momoisea after a grubber kick bounced off the left upright levelled the score up. The Newcastle number one atoned for his earlier error in crossing for a four-pointer shortly after.

Another Newcastle try, this time from edge backrower Zac Hosking pushed the margin out further, with the teams going to the break with the Knights leading 16-6.

Both coaches made a large number of changes in the second period, which showed with the attack from the two teams somewhat disjointed. 25-minutes passed before further points were added and it would be the Knights who extended their advantage when Brodie Jones strolled over.

Another try by Sam Stone inside the final ten minutes of the match pushed the score out to 26-6, before a late try to Mitchell Casson from the Jets, converted by Siosifa Talakai, completed the scoring.

Despite the loss the Jets had some solid performers. Isaac Lumelume was strong on the wing, fullback Luke Polselli had his moments and half Jack A. Williams tried his best to steer the team around until he limped off with what appeared to be a calf injury.

The Jets now have two weeks to regroup before their round one match.

This match report was provided courtesy of Cronulla Sharks Media.

“Given that this was the third trial, it was a disappointing performance. Newtown’s ball control was poor and we had a 50% completion rate at halftime. The Jets missed try-scoring opportunities in the first half that put the Knights in a strong position with a 16-6 lead at the break.

Newtown used 27 players in this match which gave the coaching staff the chance to see plenty of candidates push for positions in the opening round in two weeks time.

Hopefully our players will have learned some valuable lessons in this trial. Improved ball control is a must and we have to compete more effectively in the rucks. We missed scoring opportunities in the first half through lack of patience.

The coaching staff’s best players were Luke Polselli and Jackson Ferris in the backs, and Wes Lolo and Cruz Aveai-Topai in the forwards.

As it happens, our opening competition round involves another away game against the Newcastle Knights.”