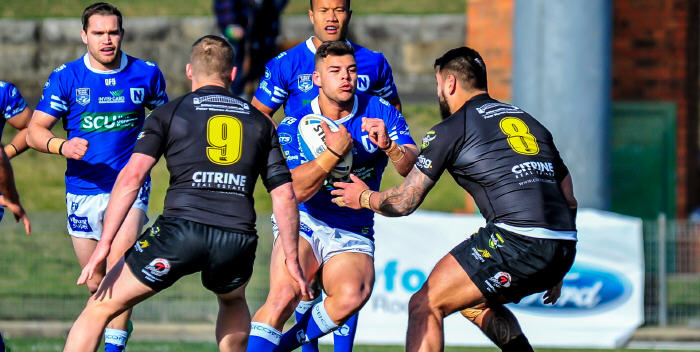 Details of the 24th Round Intrust Super Premiership NSW match between Newtown and Mounties, played at Henson Park on Saturday, 19th August 2017.

The Newtown Jets lost 10-8 to Mounties in an absorbing tussle at Henson Park. Both teams scored two tries each and the Canberra Raiders partnership club’s sole conversion was all that separated the two teams on the scoreboard at fulltime.

This is the Newtown Jets annual club reunion day.

This is also the deciding game in the 2017 Frank Hyde Shield series.

Mounties kicked off to the northern end and put the ball dead.

They were running with a very strong southerly wind right behind them.

4th min: Mounties have a set of possession within Newtown’s 30 metres, but somehow the ball is pelted over the sideline.

6th min: Mounties get close to scoring in NW corner.

Mounties get a penalty 35 metres out from Newtown’s tryline. They then lose the ball in the second tackle.

Joseph Paulo gets to his kick and Mounties knock on 20 metres out from their own line.

12th min: Adam Clydsdale scores from dummy-half, 10 metres to the right of the southern goal-posts.

20 mins gone, and despite having the strong wind behind them, Mounties still trail 4-0

22nd min: Mounties start to get some fluency in attack but an outside back gets tackled out over the sideline

23rd min: Penalty to Newtown 15 metres out from Mounties tryline

Mounties starting to make good ground, then they knock on, and then concede a penalty in the 28th minute

Goal-posts at both ends are swaying noticeably in the wind

Try not converted. The score is 4-all after 32 minutes.

Mounties look fairly sharp in the next set, presumably motivated by having scored that try

34th min: Newtown gets relief from a penalty 30 metres out from their own line

36th min: Jason Schirnack makes a break up the left side, Edrick Lee in supports sends a good pass to Tyla Tamou who scores in the SE corner

Not converted from wide out. Newtown leads 8-4 in the 37th min.

In the wake of that very good try, Jets Director Terry Rowney is observed walking through the crowd on the grandstand side with a huge smile on his face

They then knock on in the last ten seconds of the first half.

Newtown kicks off with the wind behind them

42nd min: Joseph Paulo’s long cut-out pass is caught by the wind and the ball sails out over the western sideline.

Mounties forward Makatoa is proving to be a handful in defence

45th min: Jets knock on 40 metres out from their own line

46th min: Mounties kick on the last tackle goes out on the full

Penalty to Newtown 20 metres out from their own tryline

Mounties get close to scoring in the 54th minute

Halfback Duggan is on and seems to be getting Mounties moving more dangerously with the ball.

Croker scores 10 metres to the right of the posts

Duggan was involved in creating that opportunity

70th min: Paulo breaks through – controversy as to whether he lost the ball in forcing a pass or was it stripped by a Mounties player

73rd min: Penalty to Mounties and Jets get marched another ten metres for stroppiness (20 metres out from Mounties line)

76th min: Higgins tries to force his pass 20 metres out from Newtown’s line and it goes out over the sideline

Mounties are held up over Newtown’s tryline in 77th minute

78th min: Jets stage a spirited attack with plenty of offloads but they can’t get to the kick

Mounties run down the clock