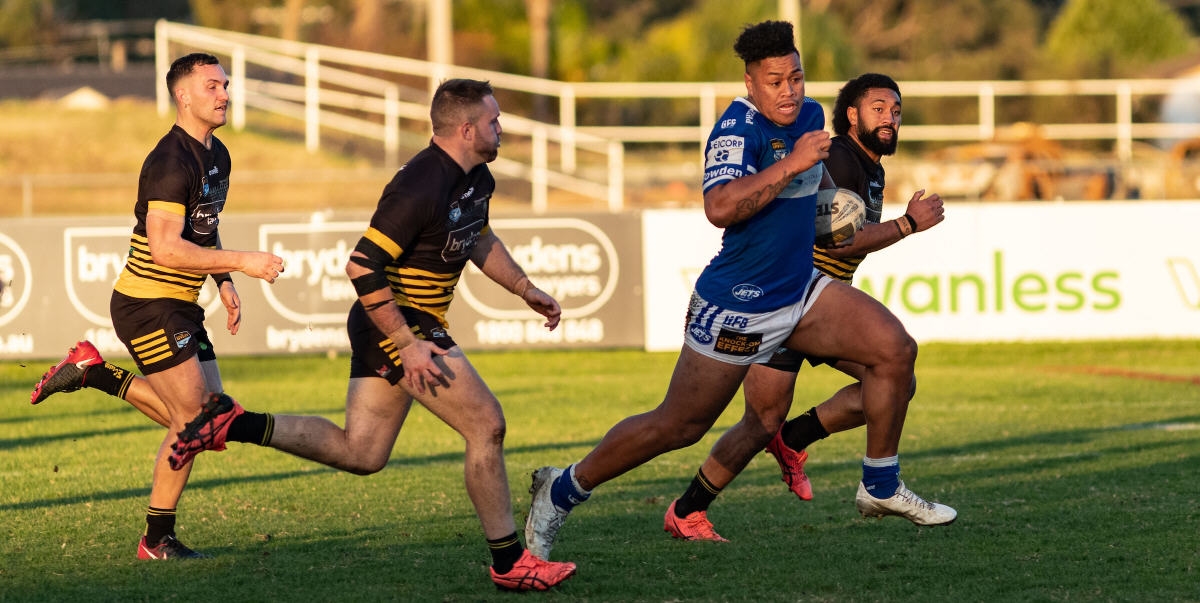 Franklin Pele barnstorming his way to a third try at Aubrey Keech Reserve in the Jets big win over Mounties. Photo: Mario Facchini/mafphotography

(Courtesy of the NSWRL)

An error from Mounties in the first set allowed Newtown to assert some early pressure. The visitors took full advantage of their opportunity through towering front-rower Thomas Hazelton, who powered his way through the line and reached out to score under the posts.

The Jets went back-to-back when five-eighth Kade Dykes sliced through Mounties’ line before offloading to dashing fullback Lachlan Miller, who turned the afterburners on to score between the uprights.

Mounties had their opportunities to get on the scoreboard, and they were finally able to crack the Jets’ defence through Tui Katoa who dived over in the corner following a cut-out pass from second rower Dane Aukafolau.

Newtown’s interchange forward Franklin Pele terrorised the home side’s defence in the final five minutes of the half, crashing over twice (in the 35th and 37th minutes) to give his side a 24-4 lead at the break.

The Jets continued their dominance by being the first to score in the second half, when the elusive Kade Dykes stepped and weaved his way over for Newtown’s fifth try of the afternoon.

Newtown came up with another try through a clever offload from back-rower Kayne Kalache, which saw Rhys Davies streak away downfield before finding Tyla Tamou to finish off the movement.

A short restart allowed Mounties a chance to respond, and the home side took advantage as Dane Aukafolau burst through a hole to score his side’s first try of the half.

Mounties scored consecutive tries for the first time in the game after a short side raid found Dylan Smith, who stepped around a Jets defender to score in the corner.

With less than ten minutes left Newtown’s “Mr Versatile”, Tyla Tamou, claimed his second try after picking up a loose ball and dashing in to score.

One of the highlights of the afternoon was saved for the 77th minute, when Pele completed his hat-trick, running 80-plus metres to score in the corner and give his side a commanding 46-14 victory.

Newtown centre Mawene Hiroti had landed seven conversions in a row but was unable to improve on Pele’s try and make it eight out of eight.

Five-eighth Kade Dykes starred for the Jets, breaking the line on several occasions and scoring one try, proving to be a constant threat to Mounties.

Franklin Pele had an afternoon to remember, scoring twice before the break and streaking away for his third late in the match.

The Jets were solid in defence in withstanding plenty of Mounties attacking pressure, giving Newtown the platform to attack with such authority.

Mounties were still in the contest just prior to halftime, but the Franklin Pele try-scoring double within the last five minutes of the first half virtually put paid to the hopes of the home team.

The second-placed Newtown Jets (now on 25 points) take on the fifth-placed Parramatta Eels (22 points) at Henson Park on Sunday, 17th July at 3.00pm.

Half-Time: Newtown led 24-4.
Both Newtown and Mounties had gone close to scoring on several occasions in the first half.
Second Half:
52nd minute: Kade Dykes try.