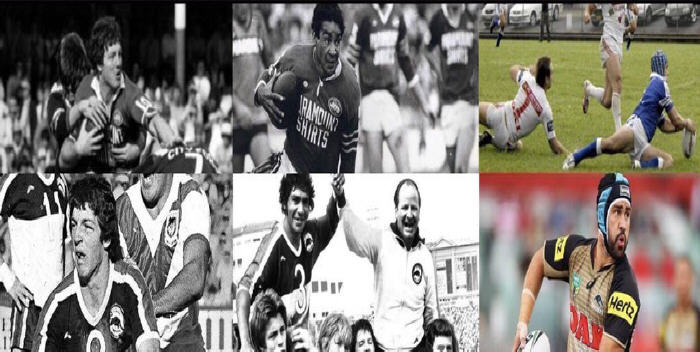 Penny and the Jets

In many respects Newtown and Penrith are worlds apart.

With significant differences in the urban aesthetics and demographics of the two areas, the distance between the clubs often seems greater than the 46 kilometres that separate Henson Park and Panthers Stadium.

However, despite these differences, many links have been forged between the two clubs since the Panthers joined the Sydney premiership in 1967, particularly when it comes to influential players. Ahead of Saturday’s clash at Henson Park, we’ve decided to look at five players who have had starred for both clubs.

He’s one of the most iconic players in Newtown’s 110-year history but it’s also worth noting that Squeaker played three seasons for the Panthers during the late 1970s. After debuting for the Bluebags as a teenager in 1971, Wilson joined the Chocolate Soldiers in 1976 following a one-season stint in the bush with Port Kembla. While Penrith didn’t make the finals while he was at the club, Wilson had a personally productive time at the foot of the mountains scoring 260 points. After returning home to Henson Park in 1979, Wilson played an integral role in the Jets return to prominence under the coaching of Warren Ryan. In 1980, he was the competition’s leading point scorer with 197 points while in 1981 he was a major player in the Newtown’s charge to the grand final, playing the majority of the regular season at halfback and starring from the bench during the finals series.

Believe it or not, the Panthers’ first-ever skipper was a former Bluebag, and not just any Bluebag either – he was a member of Newtown’s team of the century! Tony Brown was a fan favourite at Henson Park during the late 50s and early 60s. A member of the 1960 Kangaroos, Brown played 10 Tests for Australia between 1958 and 1960 and captained Newtown for six seasons, including semi-final appearances in 1959 and 1962. After leaving the club at the end of the 1964 season, Brown joined Penrith who were playing in the NSWRFL Second Division. When Panthers were promoted to the big league in 1967, Brown was appointed captain, however, he only managed three appearances for the before a leg injury forced him into retirement.

Before he held the dual role of Panthers supremo and rugby league oracle, Gould was a clever ball playing backrower who served both Penrith and Newtown with distinction. A Parramatta junior, Gould was graded by Panthers in 1976 and less than two years later found himself captaining at club, aged just 20. After battling eye injuries in 1979 and 1980, Gould joined the Jets as part of the Warren Ryan-led revival in 1981 and was involved in a series of magic moments during that years finals series, including a brilliant solo try against Manly in the Minor Preliminary Final and a handy try assist in the grand final against Parramatta. Gould shifted to Canterbury in 1983 and following a brief stint with Souths in 1986, turned his hand to coaching picking up premierships with Canterbury (1988) and Penrith (1991) and six Origin series wins with NSW.

A product of the St Mary’s junior rugby league club in the Penrith district, Blacklock has the rare distinction of captaining Penrith to their first ever grand final win, the 1978 under 23s decider, despite playing almost the entire first half with a broken arm. After making 26 first grade appearances with the Panthers, the indigenous winger shifted to Newtown in 1981 had an immediate impact, scoring 11 tries in 23 games, including three during the final series. Blacklock moved to Canberra in 1983 playing two seasons with the Raiders before retiring from Sydney football.

Because of his heroics for St George Illawarra during their 2010 premiership season, it’s easy to forget that the headgeared playmaker cut his teeth as a footballer with the Jets. Soward debuted for the Roosters in 2005, but because of the fierce competition for halves spots at Bondi Junction spent a lot of time donning the Royal Blue. His time with the club was fruitful to say the least. In 2006 he led the Bluebags to their first grand final day appearance since the club’s Third Grade side made the big dance in 1982. While Parramatta won the 2006 decider 20-19 with an extra time field goal, Soward acquitted himself well and continued to splay for the Jets until his mid-season transfer to the Dragons in 2007. Joining Penrith in 2014, Soward proved an influential figure in a young Panthers side, which shocked the league world by coming within one game of the 2014 Grand Final.