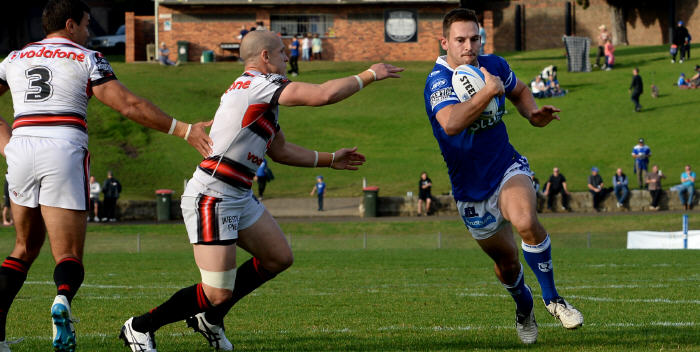 Newtown centre Matt Evans is having a fine 2016 season with the Jets, after having missed most of 2015 with injury. Photo: Michael Magee Photography

Penrith Panthers are one of the real danger teams of the Intrust Super Premiership and they are about to meet the Newtown Jets for the first time this season.

Jets supporters will remember Jamie Soward’s strong performances back in 2006 and 2007. Tomorrow (Saturday, 25th June) will be the first time he has played against Newtown.

Tomorrow also marks ten years since Newtown has played a competition game at the St Marys Leagues Stadium. The Jets had a huge win there in 2005 when Nathan Merritt set a club individual points scoring record for one game (5 tries, 10 goals, 40 points). A year later in 2006, and this time as partners of the Sydney Roosters, Newtown had another big win against the then Penrith-St Marys Cougars.

This game is being broadcast live on Steele Sports, www.steelesports.com.au

There will be a highlights package from Round 15 on the NSWRL website, www.nswrl.com.au, from 5.00pm this afternoon (Friday, 24th June). Make sure you check out all of Newtown’s tries from last Saturday against the competition leaders, the New Zealand Warriors.

Here is the ISP NSW competition table after 15 rounds:  http://www.nswrl.com.au/intrust-super-premiership-nsw/ladder1.html

Please make note of the details for Newtown’s next home game:

The Newtown RLFC was well represented at the Men of League benefit function held at Canterbury Leagues Club on the 3rd June for Bill Noonan. Bill was a former New Zealand Rugby League international who played with Canterbury-Bankstown from 1970 to 1978, and then with Newtown in 1979 and 1980. He is one of the most respected players of his generation, and was described by Warren Ryan as being “the most professional Rugby League player he ever coached”. Sadly, Bill has not been in good health and the Newtown RLFC extends best wishes to Bill and his family.

Grant Millington is currently playing with Castleford in the UK Super League competition. He played for Newtown in 2006 and 2007 and scored a spectacular try against the Penrith-St Marys Cougars when the Jets last played at St Marys Leagues Stadium back in 2006.

Mark Kheirallah is still tearing them up in the UK Kingstone Press League 1 competition. He recently scored 40 points (with 4 tries and 12 goals) in his team Toulouse Olympique’s 84-6 win against Keighley. Jono Ford played with Toulouse Olympique in the same game.

Frank-Paul Nuuausala is transferring from the Canberra Raiders to the famous Wigan club. (This transfer also means that big Frank-Paul won’t be available for Mounties for the rest of 2016).