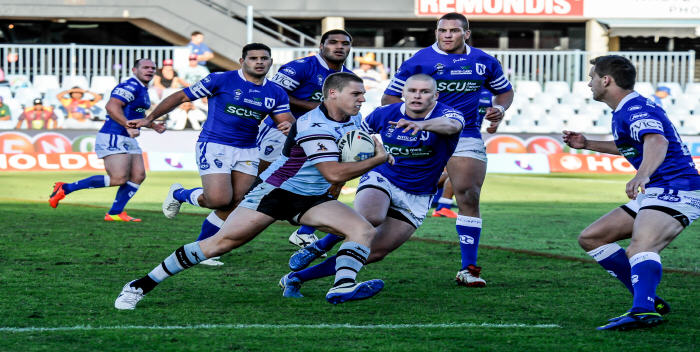 Report on the 7th Round VB NSW Cup match between the Cronulla Sharks and Newtown, played at Remondis Stadium on Saturday, 19th April 2014.

The Cronulla Sharks proved far too strong for the visiting Newtown Jets at Remondis Stadium last Saturday, clocking up a huge 46-10 winning margin. The Sharks looked like a team hell-bent on defending their 2013 NSW Cup premiership title as they ran up an unassailable 26-0 lead by half-time.

Both teams fielded changed starting line-ups from those that had been announced earlier in the week. Fijian international Kane Evans came into the Newtown Jets team, along with the experienced hooker forward Heath L’Estrange. The Cronulla Sharks, a NSW Cup joint venture between the Melbourne Storm and Cronulla-Sutherland, brought a formidable looking squad into this game.

Cronulla had a significant surplus of possession in the first half and their smarter players quickly identified Newtown’s weaker defensive points. The Jets contributed to their own demise with some poor execution when they had the ball as well as some glaring defensive errors that led to several Sharks tries. Cronulla had more than 60% of the ball in the first half and had the calibre of players capable of taking full advantage of this. Newtown’s errors when in possession at Cronulla’s end of the field ensured that they remained scoreless until half-time.

The share of possession might have been slightly more even in the second half but the Jets were most unlikely to bridge the points’ difference. Newtown winger Jonathon Reuben showed admirable determination in scoring a try soon after half-time. The Sharks extended their lead to 36-4 and there were only ten minutes left to play when hooker Heath L’Estrange put Ryan Verlinden over for Newtown’s second try.  The Sharks-Storm consortium added two more tries to blow the full-time score out to 46-10.

The Jets coaching staff noted after the game that Newtown simply did not have the physical firepower in the forwards to be able to cope with such a possession deficit in the first half. The Sharks fielded powerful props and back-rowers, clever halves and plenty of strike-power at fullback and on the wings and they made Newtown pay for their errors.

French international Rémi Casty, playing his first match since the Roosters-Wigan World Club Challenge match, made an impressive debut with the Jets. Ryan Verlinden and Kane Evans tried hard in an out-gunned forward pack and Jonathon Reuben gave his best display so far this season.  Heath L’Estrange and centre Tautau Moga were both returning after extensive lay-offs due to injury.

The Jets return to Henson Park next Saturday, 26th April, to take on the New Zealand Warriors. This is the Warriors first season in the NSW Cup in place of the former Auckland Lions and Auckland Vulcans club entities. This 8th round NSW Cup fixture is due to commence at 3.00pm.