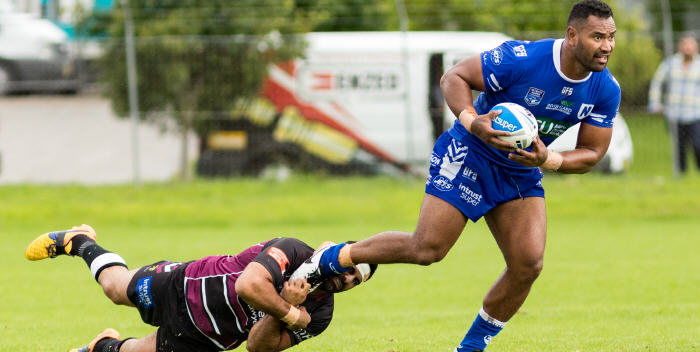 The Jets graft out a valuable win in tough circumstances

A hard-fought win against tough and determined opposition.

NSWRL ISP NSW – Round One

The game was broadcast live by Hawkesbury Radio 89.9 FM.

Weather: Steady showers in the first half, clearing in the second half, 24 degrees Celsius.

The inaugural BWSE team was:

This was the debut ISP NSW match for the BWSE joint venture, and the match was being played at a venue that most Newtown Jets players would have been totally unfamiliar with.

BWSE kick off with Newtown defending the southern end in the first half.

19th min: Try to Daniel Mortimer next to the right-hand upright. Converted by Joseph Paulo (who captained the USA Tomahawks in the 2013 Rugby League World Cup).

33rd min: Try to winger Peter Schuster 7m in from the south-east corner. Not converted.

In these weather conditions and on this special occasion for the home team, 14-6 could well be a match-winning lead.

55th min: Hooker Manaia Cherrington scores from dummy-half 10 m to the left of the uprights. Converted by Joseph Paulo.

This is the first time the Jets have led in the entire game.

Jets defend on their own line for the last two sets.

BWSE lose the ball in the final seconds.

Greg Matterson (Newtown’s coach) made these post-match comments: “That was a tough win. We dug deep when we most needed to”.

A valuable first-up win to the Newtown Jets in tough circumstances. Hopefully this will be a valuable team-building exercise for 2017.

And here is a very fine article about Daniel Mortimer and his special relationship with the Newtown Jets:  http://www.nswrl.com.au/news/2017/03/06/mortimer_right_at_ho.html