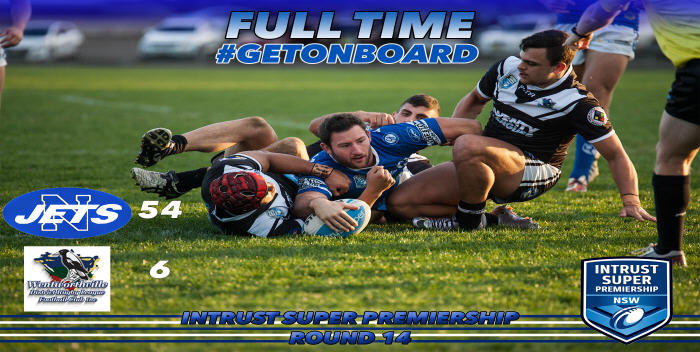 The Jets recorded their biggest home game winning margin since 2008, and Henson Park took on a somewhat surreal Latin American flavour for the day

Newtown had this game wrapped up at half-time but coach Greg Matterson was admirably realistic and measured in his post-match assessment. He noted that Wentworthville had begun the 2016 season strongly, and were now caught up in the blow-back from Parramatta’s off-field and administrative turmoil, especially with mid-year player transfers and injuries. Wenty had also had a recent change of coaching personnel. He was pleased with Newtown’s performance on the day, especially bearing in mind the enforced absence of players such as David Fifita and Junior Roqica. He was also pleased with the strong showing of two of the younger players, Harrison Muller and Kenny Niko (with the latter player being on debut for the Jets).

Other ISP NSW 14th Round matches played on the weekend:

The ISP NSW competition table after 14 rounds is as follows: http://www.nswrl.com.au/intrust-super-premiership-nsw/ladder1.html

The Newtown Jets will host the competition leaders, the New Zealand Warriors, with Mounties moving back into second place as a result of their loss to North Sydney at North Sydney Oval on Sunday.

The Newtown RLFC proved itself to be a good corporate citizen of the Rugby League world, when Henson Park hosted a quite extraordinary (and heart-warming) display of Rugby League football, Latin American style.

The main curtain-raiser was a full-length Rugby League international (two forty-minute halves), the first-ever staged between two Latin American nations, between Chile and El Salvador. Both countries have known enormous social and economic turmoil in the 20th century and many of the players had either come to Australia as young refugees themselves, or they are the sons or grandchildren of people who fled their homelands that had been torn apart by civil war and the cruel overlordship of neo-fascist regimes.

Chile showed that they have the makings of a very competitive national Rugby League team in defeating a gallant El Salvador team 58-20. In winning this ground-breaking match, Chile won El Escudo del Desafio, the Shield of Defiance.

Last week’s Rugby League Week (Thursday, 9th June) ran a double-page spread on pages 32 and 33, “Queenslanders give league a Latino leg-up”, which focused on some of the personalities who were going to play in the Chile-El Salvador international match.

Saturday’s Daily Telegraph (11th June) ran this moving human interest story on one of the El Salvador players, Fredy Arteaga-Figueroa, on how Rugby League football and the friends he has made through the game has enabled him to rebuild his life in his adopted country: http://www.dailytelegraph.com.au/sport/nrl/rugby-league-helps-fredy-arteagafigueroas-fight-to-flee-from-heroin-hell/news-story/96d0c5d24a00fee44deca7fbbfcad6df

Grand old Henson Park, for so long an Anglo-Celtic cultural enclave, has never known such exotic influences such as the stirring Central American and South American national anthems ringing out from the sound system, the Spanish language conversations and excited barracking, plus the food stalls with interesting new taste treats. And not to mention the Chilean Easter Island dancing girls troupe who made a truly sensational appearance, with Henson Park ground announcer John Lynch claiming later that he thought he might have to head to the RPAH cardiac arrest unit!

Newtown’s new Latin American Rugby League friends made a terrific debut at Henson Park, and along with their many supporters we hope that they will be back again in 2017.

Wentworthville kicked off to the northern end of Henson Park.

Penalty to Newtown in the first minute.

Jordan Drew shrugs off Wenty defenders and scores in the south-eastern corner in the second minute,

Converted by Fa’amanu Brown from the sideline. Newtown leads 6-0.

Newtown’s error in the play the ball in the 9th minute.

Newtown had the majority of possession in the first ten minutes.

12th min: Penalty to Newtown on their own 20 metre line.

In the ensuing set Travis Robinson eludes his opponent and scores in the south-east corner. Mitch Brown had sent him a perfect pass. Not converted. Newtown 10-0 after 13 mins.

19th min: Penalty to Newtown 40 metres out from the Wenty try-line

More of a case of the Wenty ball-carrier falling downwards into Capewell’s arm (Jets ground announcer John Lynch later remarks that it definitely wasn’t a stiff-arm in the classical style of old-time hard nuts such as Paul Sait and “Mad Mick” Alchin!)

31st min: Newtown pass snapped up by a Wenty defender

38th min: Kurt Capewell surges over in the south-west corner

Greg Matterson says there were several good features in the first half Concerned at missed support chances when midfield breaks had been made The second half would provide the opportunity to work on plays that will be needed against stronger teams “Don’t give Wenty a sniff in this half – you’ve got your boots on their throat – don’t let up on the pressure”. Jets would have the added advantage of the strong southerly breeze in the second half “Be wary of giving away 7 tackle sets – the ball will run strongly into Wenty’s in-goal zone Be ready to lift your energy levels immediately from the kick-off Wenty will be desperate to get back into the game in the early minutes of the second half Be ready to weather their fightback”. Team captain Mitch Brown pointed out aspects to exploit in the second half.

Newtown running towards the hill end in the second half

Penalty to Newtown in the 43rd minute

Another try to Jordan Drew in the north west corner in the 44th minute Not converted, Newtown leads 30-0

Wenty are forced into a goal-line drop-out

Newtown’s quick hands puts Travis Robinson in at the north-west corner in the 14th min.

Newtown knocks on from the short kick-off

Penalty to Wenty in 62nd min

Penalty to Newtown in 67th min

Completion trends were similar to the first half figures Penalties favoured Newtown for the match.

Coach Greg Matterson gets ready to prepare his team for the mega-blockbuster showdown with the top-of-the-table New Zealand Warriors next Saturday (18th June).