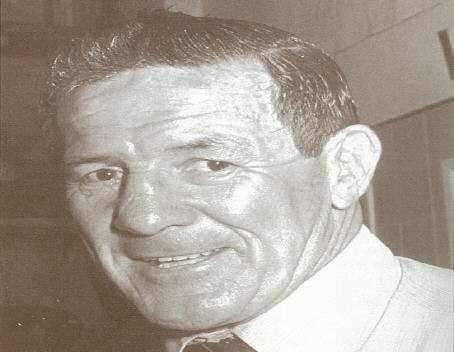 The Newtown RLFC regrets to announce the recent passing of the former first grade player and long-serving club secretary and Director, Frank Farrington.

Mr Farrington was bred and raised in the heartland of Bluebag territory, St Peters. He served with the Allied Occupation Forces in Japan after 1945.

Frank was graded with the Newtown RLFC in 1949 and played with the club until 1959, except for player-coaching stints at Cowra, Narrandera and Mackay. He also boxed professionally in the light-heavyweight division between 1946 to 1955. He was a relatively light but extremely tough and durable front-rower, and no doubt his boxing experience and Spartan training regimen assisted his Rugby League career and his ability to mix it with heavier opponents.

Among his achievements as secretary were the signing of Jack Gibson as Head Coach for the landmark 1973 season; then along with Gibson rebranding the Newtown club from being the Bluebags to becoming the Jets; bringing John Singleton on board in 1977 as a sponsor and club mentor; the signing of Manfred Moore from American football also in 1977; the recruitment of Warren Ryan as first grade coach in 1979 and the progression through the 1979 and 1980 seasons to making the NSWRL First Grade Grand Final in 1981.

Mr Farrington was heavily involved in the valiant attempts to save the club in late 1983 and no-one worked harder to try and make the proposed relocation to Campbelltown a reality. He worked closely with the present-day Directors Terry Rowney and Barry Vining in keeping the club alive in those darkest of years between 1984 and 1990, before the club returned to senior football in 1991. He continued to serve as a Newtown Director between 1991 and 2000, and was the recipient of a special presentation from the club in 2000 in recognition of his extraordinary 50 years of continued service to Newtown.

Frank was a Life Member of the Newtown RLFC and the NSW Rugby League, and was awarded an Australian Sports Medal in 2000. He managed NSW Rugby League representative teams on several occasions and he is especially well-remembered as the team manager of the 1982 Kangaroos, the Invincibles, on their undefeated tour of Great Britain and France.

The NRL historian Terry Williams noted in his 1993 history of the Newtown RLFC, “Out of the Blue”:

“Farrington’s greatest work was at the club level where he gave his heart and soul to the Newtown cause, and he personified the never-say-die inner city battler”.

Renowned Rugby League author Ian Heads recalls that Frank was a huge devotee of jazz – he owned a large collection of jazz albums and he regularly attended concerts of visiting jazz artists.

Mr Heads described Frank as “a died-in-the-wool Rugby League man and about as heart and soul Newtown as anyone could ever be”.

Terry Williams and Ian Heads pretty much say it all – Frank Farrington was one of the outstanding identities in the Newtown club’s 107-year history.

The Newtown RLFC extends sincere condolences to the members of the Farrington family, who have requested that the funeral arrangements remain private.