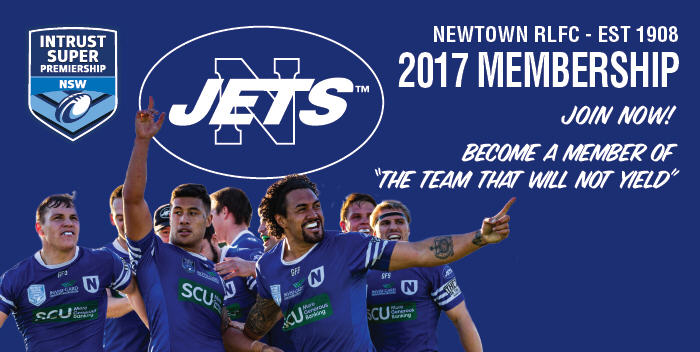 Be more than simply a supporter.

Show your passion through a positive commitment to the Newtown RLFC – by taking out a Jets membership.

Your commitment provides financial support for the club, and gives the players and officials confidence that you are with them. BECOME A MEMBER OF “THE TEAM THAT WILL NOT YIELD”, and join now!

There is a range of membership packages to suit everyone.

This link below takes you to the Newtown Jets website and all the information you will need about making an informed decision to become a member of Australia’s oldest Rugby League club, the Newtown Jets:

The Newtown Jets are a family and Henson Park is our home. Catch a glimpse of a day (& night in this instance) at home courtesy of our friends at Sydney Film Studios here: https://www.youtube.com/watch?v=HUjEqcBPNJY&feature=youtu.be

Developments at training this week …

These two players signed professional forms with the Newtown RLFC on Thursday afternoon:

A half-back and five-eighth; 24 years old; born in Apia, Samoa; was a member of the Cronulla Sharks NSW Cup premiership team in 2013; played NRL with the Cronulla Sharks in 2014; played with Wests Tigers in 2015. Represented Samoa in 2013 and 2014, including several top-class performances in the 2013 Rugby League World Cup.

Fullback and winger. Was a champion schoolboy Rugby player and athlete at Waverley College. An outstanding Sydney Roosters junior product; played in the NYC with the Roosters; played with the Newtown Jets in the NSW Cup in 2010; has since played several seasons with the Limoux and Carcassone clubs in the French Rugby League elite competition, including appearances in the French Rugby League Championship Final and the Lord Derby Cup Final. Has played with the famous Salford club in the UK Super League, and also in the Illawarra Carlton League competition.