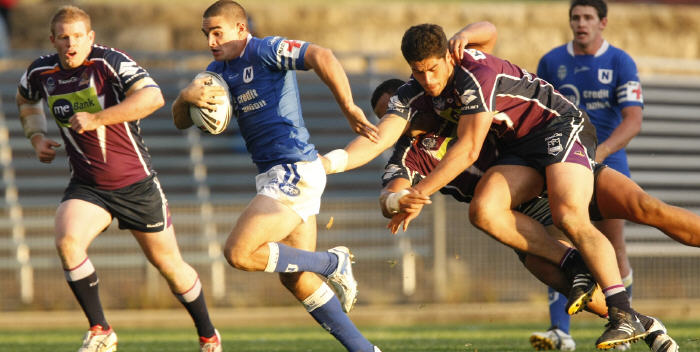 The Will-o’-the wisp fullback, winger and halfback Luke Towers has returned to Henson Park after several mercurial seasons in France and England. In this photo from 2010 one of the Melbourne players he has evaded is a younger version of the present-day Storm and New Zealand Kiwis front-rower and team captain Jesse Bromwich. Photo: Jason McCawley Photography.

More new blood for the Jets as they complete their third week of pre-season training.

Here’s a reminder that 2017 Newtown Jets membership packages are now available, and you can check out which membership deal best suits your needs by going to this link on the Newtown RLFC website:

Your membership of the Newtown RLFC enables the Jets to be a competitive force in the increasingly-demanding and high-standard Intrust Super Premiership NSW competition.

Please be an ambassador for our club by encouraging your family members and friends to become Newtown Jets members as well.

As of last Tuesday, here’s a list of those players who have been training with the Newtown Jets pre-season squad:

2016 Cronulla Sharks players who played with Newtown and who have now moved on to other clubs:

Congratulations to the Newtown Jets website sponsor Ari Boulas and his wife Ariane who welcomed their first son (John) recently. Ari and Ariane already have two daughters. Best wishes to the Boulas family from everyone at the Newtown Jets.

Luke Branighan has been appointed captain-coach of Oberon in Group 10 (in central-western NSW).

Tuki Jackson is the new captain-coach of the strong Albury Thunder club in Group 9 in southern NSW.

And Glenn Dumbrell is the captain-coach of Yanco-Wamoon in Group 20 in the western Riverina.

The Newtown RLFC was well represented at the NSW Rugby League’s Semi-Pro Day, held at the Australian College of Physical Education at Sydney Olympic Park, Homebush on Saturday, 19th November 2016.

The aim of the day was primarily to assist Intrust Super Premiership NSW players deal with the realities of working full-time; the demands of a tough individual and team training regimen; along with their everyday responsibilities of living in a fast-paced, complex global city such as Sydney.

The Newtown Jets are quite rightly regarded as being a family and community-oriented club and Henson Park is our home. Catch a glimpse of a day (and night in this instance) at home courtesy of our friends at Sydney Film Studios here:

In addition to buying online, you can contact Olga directly for sales inquiries on 0412 712 612 and on olga@labelplus.com.au