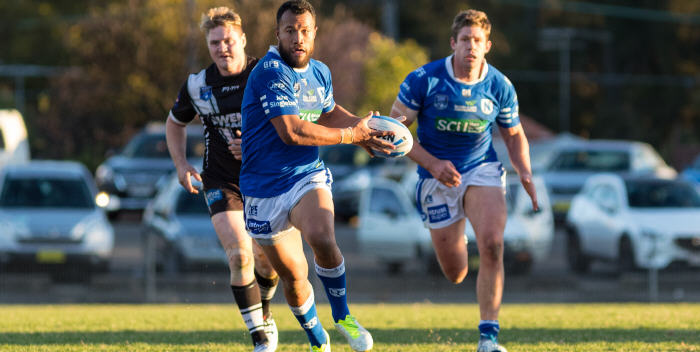 Jets finals quest is getting harder

Details of the 18th Round NSWRL ISP NSW match between Newtown and Wentworthville, played at Henson Park on Saturday, 8th July 2017.

Newtown’s 22-10 loss to Wentworthville at Henson Park on Saturday makes the Jets pursuit of a place in the 2017 ISP NSW finals all that much harder.

The recent Cronulla Sharks signing, hooker Adam Clydsdale, made his debut with Newtown on Saturday. Adam has previously played with the Newcastle Knights and Canberra Raiders and has played 55 NRL matches in his career. He is a product of the Scone RLFC in Group 21, and his grandfather is the 1956/57 Kangaroos winger, Don “Bandy” Adams.

The experienced lock-forward, second-rower and five-eighth Joseph Paulo also played again with Newtown on Saturday. He has played 145 NRL games in his career and has represented Samoa and the USA in international rugby league, as well as turning out for City Origin on several occasions.

Wenty kicked off, running to the northern end of the ground.

Newtown forced a goal-line drop-out in the second minute.

3rd min: Superb cut-out pass by Joseph Paulo to Leigh Higgins who scores in the south-eastern corner at the Sydenham Road end. Not converted by Bessie Aufaga-Toomaga.

Newtown 4-0. (Joseph Paulo has made an art form of those cut-out passes during his rugby league career).

7th min: Useful penalty to Newtown on their 20 metre line but the Jets knock on 40 metres out from Wenty’s line.

13th min: Jets on the attack but overly adventurous ball play leads to possession being turned over.

14th min: Edrick Lee and Leigh Higgins combine well to get the ball away from right on their own try-line. Lee is looking for work and joining into the Newtown backline.

17th min: Paulo’s grubber-kick into the in-goal is nearly grounded by Jesse Ramien.

Jets defend well in the 20th and 21st minutes to deny Wenty tries in either corner.

25th min: Unforced turnover by Jets 30 metres out from their own tryline.

Wenty scores in the next set, midway between uprights and corner post on the north-west side.

Penalty to Jets 10 metres out from their own tryline in 28th min.

Newtown has the ball stripped midfield.

Jets had not been on the attack at Wenty’s end for some time.

Jets forced into an in-goal drop-out in 31st min. Wenty’s game plan is starting to work for them in keeping the Jets in their own half.

Wenty lose the ball stone-cold in midfield in 32nd min.

Jets get to Wenty’s end but final tackle kicking option is fairly ordinary.

35th min: Jets knock on a Wenty high kick inside their own in-goal zone, forcing another goal-line drop out.

Danger time for Jets, with Wenty hungry for more points.

Wenty lose the ball one metre out from Newtown’s tryline.

38th min: Penalty to Newtown 35 metres out from their own line.

Badly need to improve our end of set options; try to build and maintain pressure on these blokes; better kick-chase for our kicks needed.

Interchange player Blake Judd has a shoulder injury and is gone for the rest of the game.

Former Newtown centre of the 1960’s, Bob Keyes, is seen in the crowd at half-time. Bob was a world-class centre and a real gentleman. When you look up “class” in the dictionary, you’ll see Bob Keyes’ photo there!

Both Newtown (11th) and Wentworthville (9th) are playing for their lives in this competition.

Newtown is running to the northern end, which John Lynch points out has historically been the Jets’ lucky second-half end.

49th min: Newtown’s chip kick into the north-eastern corner is snapped up by a Wenty player, and ultimately ends in a 95-metre try to Tuha. The try is converted and Wenty lead 16-4 in the 51st min.

52nd min: Wenty turn the ball over after a tremendously-hard hit by Kurt Dillon 40 metres out from Newtown’s line. Dillon truly is the form front-rower of the competition.

Clouds clear and the conditions are ideal for spectators.

Wenty aren’t exactly playing a flash brand of rugby league themselves as they make another unforced handling error 30 metres out from Newtown’s tryline.

56th min: Newtown in turn lose the ball in play the ball 30 metres out from their own line.

57th min: Penalty to Newtown 15 metres out from their own line was badly needed.

Jets not applying enough pressure with their kick-chase.

60th min: Wenty kicks towards Newtown’s right-side which isn’t cleaned up, and ends in another runaway try to Wenty.

Converted from the sideline. Wenty leads 22-4 with 18 mins to go.

Penalty to Newtown in 63rd min for interference in play the ball.

65th min: The admirable Kurt Kara breaks through two Wenty defenders almost by sheer willpower and scores to the right of the posts.

Wenty getting up very fast in defence to try to stifle Jet ball-players Paulo and Kara.

A flurry of passing by the Jets ten metres from Wenty’s tryline in the 71st min looks promising, but a speculative pass flies out over the sideline.

Newtown pushing the ball about with great urgency 30 metres out from Wenty’s tryline in the 76th min, but once again the ball ends up over the sideline.

Didn’t put enough pressure on Wenty kickers and play-makers on the last tackle, allowing them to dictate the terms of play to Newtown.

Plenty of effort from Jets, but too many rough edges and ad-lib plays probably because of limited time together as a team in preparation for this game.

(Post-match raucous laughter emanated from the large group of well-lubricated fellows located in front of the canteen block. They appeared to be celebrating one of their number’s 50th birthday!)

Newtown has a bye in Round 19 of the ISP NSW (next weekend).

This is the annual Beer, Food and Footy Festival Day which promises to be an even bigger occasion this year.

Check out the details on this link and spread the word: https://www.facebook.com/beerfootyfood/?hc_ref=PAGES_TIMELINE&fref=nf