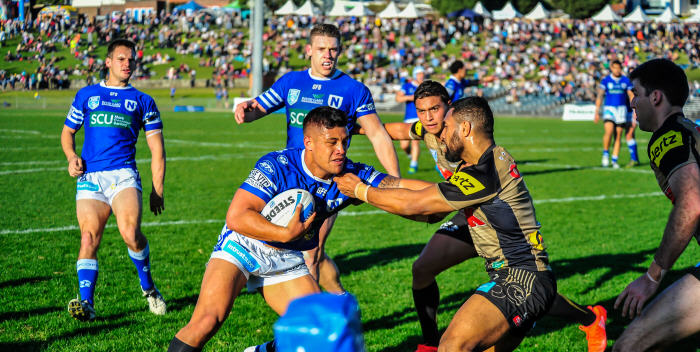 Newtown’s man of the hour … Jets halfback and Samoan international Fa’amanu Brown takes on the Penrith Panthers defence at Henson Park on Saturday, with team-mates Matt Evans (left) and Jacob Gagan in the near background. Photo: Gary Sutherland Photography

Jets tame the Panthers in an enthralling contest

Report on the 21st round ISP NSW match between Newtown and Penrith Panthers, played at Henson Park on Saturday, 30th July 2016 by Glen ‘Bumper’ Dwyer.

The Newtown Jets and Penrith Panthers turned on a finals dress rehearsal in their Intrust Super Premiership match at Henson Park on Saturday. Playing in front of a huge crowd, the two outsize forward packs went for each other all afternoon in what was an absorbing struggle. The Jets led 6-0 at halftime but the Panthers looked to be in control when they led 10-6 late in the second half. Newtown’s Samoan international halfback Fa’amanu Brown scored his second try five minutes from fulltime, and backrower Kurt Capewell converted to give the Jets a gripping 12-10 victory.

Newtown’s win represented a remarkable turnaround from just five weeks previously, when the Panthers crushed an admittedly injury-weakened Jets lineup 60-6. The presence of the inaugural Inner West Beer, Food and Footy Festival at Henson Park helped attract this season’s largest crowd, and the intensity of the footballing contest kept the audience spellbound. The physicality of the match led to several injuries and the Jets were down to one man on the interchange bench late in the game. The first points weren’t scored until the 30th minute, when Fa’amanu Brown dummied and snuck through to score to the left-side of the southern end goal-posts.

The Panthers upped the ante in the second half and there were some ferociously hard tackles made by both teams. Penrith scored an unconverted try in the 45th minute, and the next twenty minutes were a tough grind with both sides trying hard to deliver a knock-out blow. The Panthers scored their second try through a high kick into the south-eastern corner that was tapped back inside to a supporting team-mate. This try was converted from the sideline with the kicker looking directly into the late afternoon sun, and Penrith led 10-6 with 15 minutes remaining.

Newtown’s unyielding defence in this late second half period proved to be decisive, as one more try to the Mountain Men might have sealed the result. A Penrith forward put a bone-crushing hit on Fa’amanu Brown ten minutes from fulltime and he needed medical treatment before continuing. The Jets worked their way up to Penrith’s end, assisted by an exciting line-break by tough backrower Jason Schirnack. With just five minutes left, the same Panthers forward targeted Brown again, but the plucky halfback stayed on his feet, shrugged off another would-be tackler, and then drove low and hard underneath two more Penrith defenders to score just to the left of the northern goal-posts. The ice-cool Kurt Capewell converted for Newtown to regain the lead by 12-10, and the vociferous home crowd was never going to allow the Jets to relinquish this hard-earned advantage in the last four minutes.

Jets coach Greg Matterson rated this a terrific team effort, with all of the Newtown forwards working hard for this result. The Jets backs also did well considering they had been disrupted by injuries. Utility back Jaline Graham had an outstanding match, and Fa’amanu Brown was the go-to man for the clutch plays. Malakai Houma, Jason Schirnack, Kurt Kara and the tireless Matt McIlwrick also deserved special mentions.

The Newtown Jets travel away this Saturday, 6th August, when they take on the Newcastle Knights at Hunter Stadium. This 22nd round ISP NSW match kicks off at 12.40pm, and will be televised live on Fox Sports One.