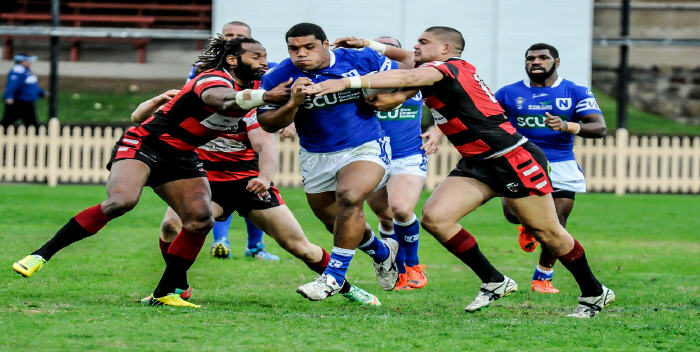 Report on the Round Thirteen VB NSW Cup match between North Sydney and Newtown, played at North Sydney Oval on Sunday, 8th June 2014.

There was no shortage of drama in the Frank Hyde Shield deciding match played between North Sydney and Newtown at North Sydney Oval on Sunday. The Jets looked set for a huge win when they led 20-0 after as many minutes. The fortunes of the game turned right around when Jets front-rower Ray Moujalli was dismissed with Newtown leading by 20-6. Norths fought back to trail by 20-16 at half-time and looked likely to go on with it in the second forty minutes. The Jets came back out and turned on an exceptional second-half performance, holding the Bears at bay early in the half and then scoring 18 points to nil to go on to record a commanding 38-16 victory.

The Jets started the game well and scored four tries in the first quarter of the game. Stylish Jets centre Tautau Moga continued his return to top form with a 70-metre intercept try, and halfback Arana Taumata stepped past several defenders to score following quality lead-up work by prop Ryan Verlinden and hooker Heath L’Estrange. Another break by Moga led to a try to five-eighth Daniel Mortimer, whose two conversions gave Newtown a 16-0 lead. Moga’s second try assist of the half enabled winger Josh Davis to score in the right-hand southern corner. Mortimer’s conversion attempt from the sideline hit the crossbar and bounced away.

Newtown’s controlled display started to unravel and errors and penalties gave Norths the field position to score from a kick into the Jets in-goal area. When Ray Moujalli was marched on a head-high tackle charge in the 30th minute, the game’s momentum turned right around. The Bears drew inspiration from the incident and added two more tries to trail 20-16. As Jets coach Greg Matterson put it, “our blokes lost the plot in that last ten minutes and our game fell to pieces. The half-time siren couldn’t come quickly enough to slow down the Bears resurgence and to enable our boys to regroup”.

Newtown had to survive some intense pressure from the Bears early in the second half and more penalties to Norths kept the Jets pinned in their own quarter. Had Norths scored first in the second half the end result may have been entirely different. Josh Davis took an intercept that defused a possible scoring chance for Norths, and fullback Jonathon Reuben made a super ground-gaining run from near his own tryline. This breakout ultimately ended in a try to Jets benchman Sio Siua Taukeiaho.

As the rain started to fall in the fourth quarter Newtown gradually gained the ascendancy. A try to Kurt Kara with 13 minutes to play made the result safer for the Jets. Newtown’s final try was scored by centre Samisoni Langi after the ball had travelled through several pairs of hands. Daniel Mortimer’s conversion from the sideline was Newtown’s final flourish in what had been a game of contrasting fortunes.

Jets coach Greg Matterson rated the game as “a performance to be proud of. Every player had a dig and helped get the team out of what had been a really tough situation, especially in the second half. It was a good tough win achieved with only twelve men on the field for more than 50 minutes.” The Newtown coaching staff named Heath L’Estrange, Kane Evans, Ryan Verlinden, Saulala Houma and Kurt Kara as being the best of the forwards. Halves Mortimer and Taumata turned in good controlled performances while Samisoni Langi, Sio Siua Taukeiaho, Josh Davis and Tautau Moga had been the best of the other backs.

The Newtown Jets return to Henson Park this coming Saturday (14th June). This Round Fourteen NSW Cup match against the Newcastle Knights is timed for kick-off at 3.00pm.