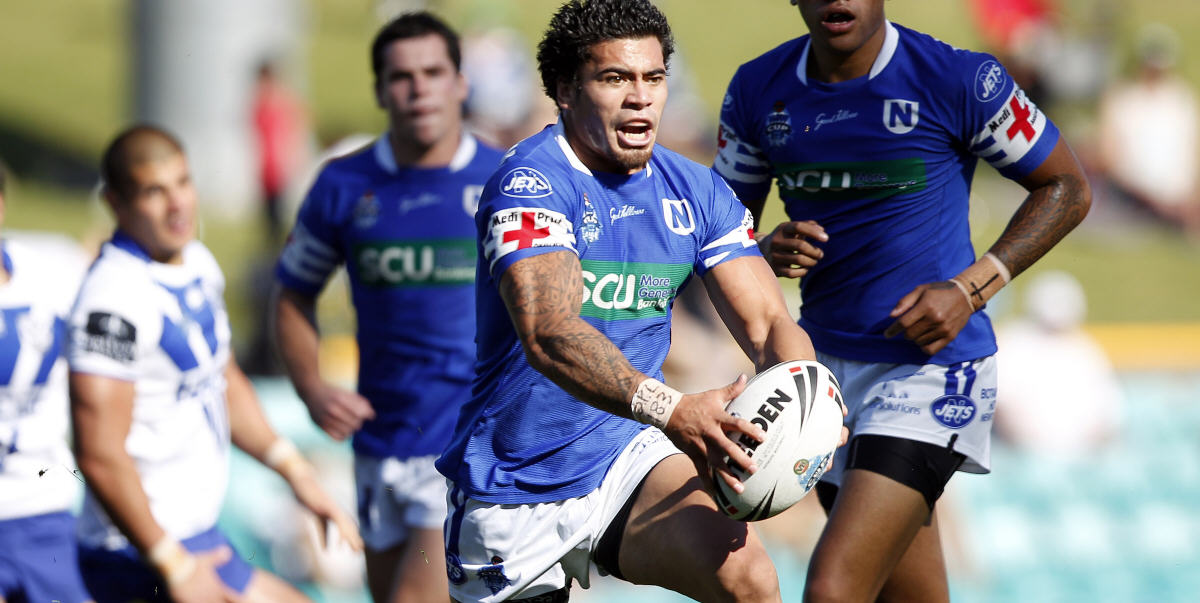 Sunday’s NSWRL VB NSW Cup Grand Final will be contested by two of inner-western Sydney’s 1908 foundation clubs, Newtown and Balmain, and will also be a clash between the teams that finished 7th and 8th on the competition table.

The Newtown Jets toppled the 2012 minor premiers and defending title holders Canterbury-Bankstown by 34-6 at Leichhardt Oval last Sunday, while the Balmain Tigers saw off the Newcastle Knights to win by 26-24.

The Newtown Jets went in against a very well-credentialled Canterbury-Bankstown line-up, who were in pursuit of their fourth successive VB NSW Cup premiership.

The Bulldogs began strongly but robust Jets defence forced them into a number of handling errors. The warmer weather most certainly told on the Canterbury side, who were coming off a fortnight’s break after winning their qualifying final.

The first twenty minutes of the match was played at a frenetic pace that was not likely to be sustained in such warm conditions.

The Bulldogs were first to score in the 20th minute by way of a break through Newtown’s left-side defence.

The Jets returned fire and put Canterbury under sustained pressure at their own end, while the Bulldogs continued to turn over possession. Some clever variations in the point of attack saw Jets second-rower Jack Bosden score in the 34th minute, with Daniel Mortimer converting the try.

Two minutes later, spring-heeled hooker Nafe Seluini darted out of dummy-half and sent winger Justin Carney in to the left of the posts.

Two minutes before halftime winger Daniel Tupou and fullback Alofa Alofa combined to make good ground, with Adam Henry providing the finishing touches for Newtown’s third try. Another conversion by Mortimer and Newtown led 18-6 at the break, after having trailed 6-0 at the 34th minute.

Jets coach Greg Matterson pointed out to his players that their quick play the balls and some judicious variations in play had caught out the tiring Canterbury forwards.

Matterson urged his players to stay solid and keep on tackling the way they had in the first half. It was up to the Newtown players as to whether they invited the Bulldogs back into the contest, or whether they stayed with the pace and locked the Dogs out of the game.

Spectators had barely resumed their seats for the second half when front-rower Andrew Pearn produced a perfect around the body pass that sent Adam Henry haring away for his second try.

Newtown’s defence continued to hold solid as the Dogs battled to bridge the 22-6 deficit.

Fifteen minutes into the second half Daniel Mortimer placed a well-directed kick into the right-side corner where Daniel Tupou plucked the ball from the air for one of his trademark leap and catch tries.

Three minutes out from full-time front-rower Josh Ailaomai, once again one of Newtown’s best forwards, broke the Canterbury defensive line, off-loaded to Mortimer who then released hooker Kurt Kara on a 40 metre dash to the posts.

The full-time score of 34-6 ended Canterbury’s three-year reign as NSW Cup premiers and put the Jets into a Grand Final in their 104th year.

The Jets had played for each other, won the battle with the big Bulldogs forward pack and shut them out of the game. Canterbury’s errors and poor handling undermined any chances they had of turning the result around. Newtown’s burst of points before and after halftime, with four tries in four sets of possession, had put the Jets on the road to ANZ Stadium.

This Sunday’s Grand Final pits two of Rugby League’s oldest names against each other, with the 7th placed Newtown Jets up against the 8th placed Balmain Tigers.

The match at ANZ Stadium is officially timed to start at 12.05pm, and the Petersham RSL club has been announced as the official Newtown Jets rendezvous point for those supporters unable to obtain tickets into ANZ Stadium.

This has been the closest and toughest VB NSW Cup competition yet contested and it isn’t surprising that two teams from outside the top four have won through to the 2012 premiership decider.

Congrats and best wishes for Newtown had come from near and far!

“Just wanted to wish the boys well in their match at the weekend. I happened to meet Justin Carney the weekend the Roosters played the Tigers, and was pleased to see that he would be playing this weekend which obviously means he is fit and well. I hope they have a good game and all come through it fit and healthy.
Rachael Meek, sending best wishes for semi-final.

“Listened intently to the closing stages [of semi-final] on ABC, terrific result and testament to that special spirit, cheers and well done.”
Michael Greenwood, in Parkes

“Congratulations on a great win. The Jets are the most exciting team in the league. Go The Mighty Bluebags.”
T&J Davis

“Great win!!!! All the best from NYC! Say g’day to Daniel Mortimer for me. He was in the bar a few years ago – what an impressive young kid. Hopefully he can help the Jets to a premiership and get back amongst first grade
Matt Astill, Owner/Manager, The Australian Restaurant and Bar, New York City

“Well done to the Jets. You should all be very proud. Good luck , do your best in the next round.”
Jenni Ross

“Congratulations on the brilliant victory on the weekend.. Absolutely enjoyed the afternoon at Leichhardt.” Rochelle McDonald

“What an exciting game against the bears, Jets deserved the victory. Good luck boys for this weekend against the doggies.” Michelle Bush