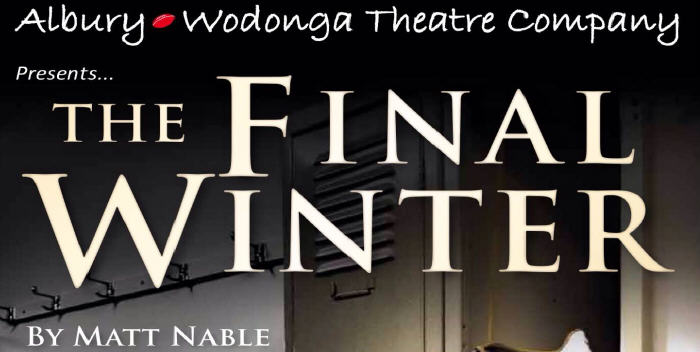 Albury Wodonga Theatre Company (AWTCo) is pleased to announce it’s upcoming show for July 2015, The Final Winter. To be staged at the AWTCo home venue, 234 Olive Street South Albury, this production will be a world premiere with local man Justin Brice not only directing the show, but having adapted it to stage from the 2007 film of the same name.

It has been a 3 year labour of love for Mr Brice who has not only adapted the script, but has sought out and obtained the rights for this production from the original writer Matt Nable. “It took a bit of time to get the script right. I basically had to watch the film with my laptop on my knee and pause the film after each line to write down what the characters said. It annoyed my family no end I am sure!” Brice said.

Set in the 1980’s, The Final Winter follows the story of two brothers, Mick and Trent Henderson that play professional Rugby League in Sydney for two different sides. The story begins with Mick’s team, the Newton Jets preparing to play Trent’s team, with the winner progressing to the semi finals. During the match, Mick is sent from the field for a late hit on Trent. The story them follows how this on field incident impacts on Mick off the field.

When asked about the production, Brice was glowing not only in his praise of the local talent involved on stage, but the level of support form the Newtown RLFC.  “The Jets have been absolutely fantastic throughout the whole production run to date. They have allowed us to use their logo’s for the production, and are also helping us to source authentic jersey’s from the period for the football change room scenes. Stuart McCarthy, the General Manager of the club has been wonderful. Nothing has been to much trouble and the Jets want to see this succeed almost as much as I do. There was even an email from a board member floating the idea of putting this on stage in Newtown. That would be fantastic, but I will look at that a little further down the track I think”.

With a strong local cast including Corey Cooper as Mick, Kathryn Lewis as Emma, Mick’s wife and local media identity Mick McGlone as Jack, the Newtown Jets coach. The Final Winter will be showing at the AWTCo venue, 234 Olive Street South Albury on July 17, 18, 24, and 25. Tickets are on sale now and can be purchased on the AWTCo website, www.awtco.org.au

The Hard Way – the real story of the Newtown Jets.

For Albury Wodonga theatre goers who might not be familiar with the story of the real Newtown RLFC, the club shared certain similarities with the former VFL club Fitzroy. Both Newtown and Fitzroy were relatively unsuccessful inner-city clubs confronted by dwindling attendances, rising costs and rapidly-changing demographics. Newtown’s future in the NSW Rugby League premiership competition was seen to be in doubt from the mid-1970’s as the NSW Rugby League started to take a hard look at expansion outside of Sydney and rationalising the number of Sydney clubs that were in poor financial shape.

Newtown is the oldest club in the Rugby League game in Australia, having been founded on the 8th January 1908. The Bluebags, as the club was popularly known from 1908 to 1972, were always a battling, working class inner city club, and always struggling for crowds and finances. The Bluebags won NSW Rugby League first grade premierships in 1910, 1933 and 1943. I understand that Fitzroy’s last VFL premiership was in 1944, adding to the symmetry between the two clubs. Despite their infrequent premiership success, the Bluebags produced 34 Australian Rugby League internationals and figured prominently in the Rugby League game’s folklore and passing parade of knockabout characters (and villains). Like Fitzroy, Newtown’s small fan base was renowned for its fierce loyalty and its teams for their never say die spirit.

The 1970’s were a critical decade for Newtown. In 1973 the club won the coveted Club Championship title, an annual award based on the collective performances of the firsts, reserves and under 23’s teams. This title was won under the coaching of Jack Gibson, one of the most famous coaches in Rugby League history. The remainder of the 1970’s though was a total disaster for the club, as Gibson moved on to the wealthier Eastern Suburbs Roosters and Newtown’s performances spiralled downwards to acquiring three consecutive wooden spoons in 1976-78. Falling crowds, lack of sponsorship and a dysfunctional licensed club were further indicators of a club headed towards oblivion.

The colourful Sydney business identity John Singleton became involved with the club in the late 1970’s and massively re-energised the Jets, as Newtown had been nicknamed from 1973 onwards. Under the coaching of Warren Ryan, Newtown moved up the competition table and made an inspired charge into the NSWRL Grand Final in 1981. In typically heart-breaking style, the Grand Final ended in gallant defeat with the Jets losing out to the rich and powerful Parramatta club in the last ten minutes of that premiership decider.

The Final Winter certainly draws on some of the social and cultural aspects of the early 1980’s period, as well as the changes that were taking place in the administration and the increasing corporatisation of Rugby League in those years. A poorly-resourced club like Newtown didn’t have much chance of survival in such a changed socio-economic environment. By the end of the 1983 season Newtown’s playing fortunes had declined and the club was seriously in debt. The Jets were suspended from the NSW Rugby League in October 1983. A proposed relocation to Campbelltown in south-western Sydney fell through and the suspension eventually turned into an expulsion. It looked as if Newtown would join the ranks of other defunct Rugby League clubs from earlier decades.

Miraculously the Jets managed to stay alive as a community organisation from 1984 through to 1990, despite not fielding a team in those years. Newtown re-entered the Rugby League playing ranks in 1991, albeit at a modest lower grade level. In 2000 the Newtown RLFC moved upwards into the second-tier (Reserves) NSWRL competition and the Jets remain there to this day. They have retained their club identity, their logo, their royal blue club colours and traditional home ground Henson Park, and have been enthusiastically adopted by what are now their gentrified and hipster inner-western home suburbs. Newtown Jets merchandise is now regarded as stylish streetwear in uber-cool suburbs like Newtown, Camperdown, Erskineville and Marrickville, a far cry from the club’s working class origins.

Maybe one day a movie can be made and a play staged about the unlikely rebirth of the Newtown Jets. If any of the theatre patrons who see this stage production of The Final Winter happen to be in inner-western Sydney on a winter weekend, they would all be very welcome to see the modern-day Newtown Jets turn out at their famous home ground Henson Park.

I commend everyone involved with this ground-breaking theatrical production of The Final Winter and I wish you success. Perhaps this production of The Final Winter might be staged one day in Newtown itself, where several experimental and innovative theatre companies are based. Until that time, as our supporters shout with considerable partisanship at our home ground Henson Park: Up the Jets!

(Written by Barry Vining for inclusion in the program for the Albury Wodonga Theatre Company’s stage production of The Final Winter.)