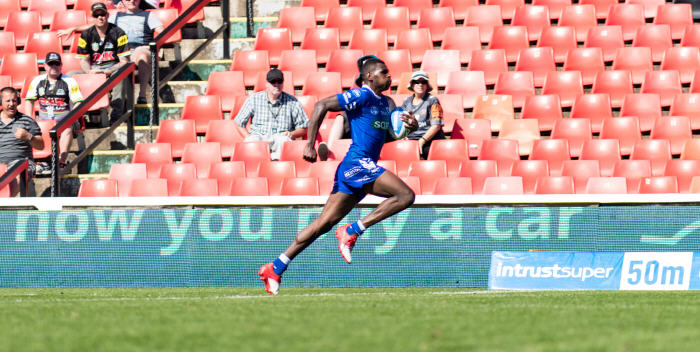 We have an inkling that Edrick Lee, formerly with the Canberra Raiders, is going to become a cult figure at Henson Park. He is pictured here racing away for the 95 metres try that put Newtown back into the contest against Penrith last Sunday. Photo: MAF Photography

All roads lead to Henson Park this Saturday, 22nd April, when the Inner West’s favourite rugby league team, the Newtown Jets, play a competition game at home for the first time in 2017

It’s been a long wait … but those Boys in Royal Blue are back home at Henson Park this Saturday, 22nd April 2017.

Their opponents are the Sydney Roosters partnership club, the Wyong Roos.

This 8th Round Intrust Super Premiership NSW match is timed for kick-off at 3.00pm.

The Jets are coming off a sensational last-minute win against Penrith last Sunday at Pepper Stadium, and they will be primed to play in front of their home crowd for the first time this season.

Prior to the kick-off, the Newtown Jets in conjunction with the Petersham RSL will be honouring all those brave men and women who gave their lives in defence of our great nation.

As well as all the fun on the DEICORP Family Hill featuring FREE jumping castles, face painting, Ice Cream Joe’s Mr Whippy & Barista, the Jetman and more, YOUNG HENRYS NEWTOWNER, Natural Lager & Cloudy Cider will be available for all the Mums, Dads and over 18s … #servethepeople

Once again in 2017 City Ford Rockdale has the Best Seat at Henson Park and it could be yours this Saturday. Sink a few beers and smash a few steak and/or sausage sandwiches for FREE! That’s right FREE Beer, FREE food, FREE entry plus Royal Blue Bean Bags in the JETPAC Ford Ranger to watch the game from. Just LIKE the City Ford Rockdale Facebook Page and post the hashtag #bestseatathenson and you could be this week’s winner!

It’s always a great afternoon on the hill at Henson, so head on down to the ‘Jewel in the Crown of Rugby League Grounds’ and support your team.

And here are all the statistics from the Penrith-Newtown match:  http://www.nswrl.com.au/content/dam/nswrl/documents/isp-stats-reports-2017/Rd7-PanthersJets.pdf

The man who was voted as the Newtown club’s greatest junior product, the incomparable Johnny Raper, turned 78 on the 12th April.

The late Frank Hyde always said that he regarded Johnny Raper as being the greatest Australian rugby league player he had ever seen in his lifetime.

The Newtown RLFC congratulates John on his significant birthday, and sends greetings to him and his wife Caryl.