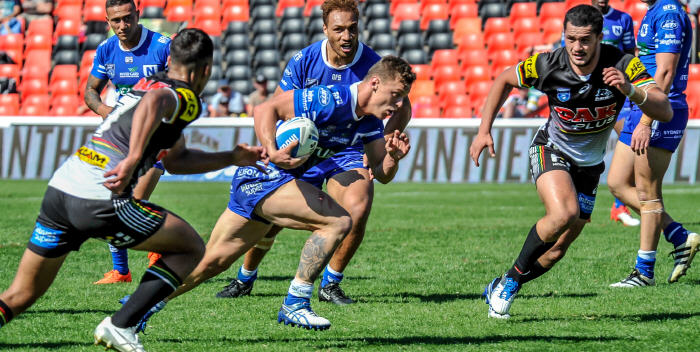 Livewire Newtown Jets fullback Leigh Higgins (with the ball) was previously with the St George-Illawarra NYC team in 2015 and with Collegians in the Illawarra first grade competition last year. His Jets team-mates in the background (from the left) are Manaia Cherrington, Sam Tagataese, Edrick Lee and Jaimin (aka Jimmy) Jolliffe. Photo: Gary Sutherland Photography

The Newtown Jets secured two badly-needed competition points when they defeated Penrith Panthers 18-16 in the Intrust Super Premiership rugby league match at Pepper Stadium on Sunday. In a game played in very warm conditions, the Panthers led 10-0 at half-time and looked to have the match in hand when they led 16-6 with less than ten minutes remaining. The Jets staged a pulsating finish, scoring two late tries with the last try being converted from the sideline in the final minute of play.

Penrith had the better of the first half but the Jets hung in and managed to stay within striking distance of the home team. The Panthers had their opportunities to lock up the result in the second half but strong defence and some good fortune kept Newtown in the contest. Lanky Jets winger Edrick Lee snapped up an intercept with eight minutes left on the clock and raced 95 metres to score. The Jets forwards staged one last offensive and carried the ball deep into Panthers territory in the second last minute, and young back-rower Jayden Walker won the race to ground the precisely-directed grubber kick into the opposition’s in-goal by five-eighth Penani Manumalealii. Halfback Fa’amanu Brown’s conversion attempt from the sideline followed a wobbly trajectory, but it was straight enough for the touch judges to raise their flags to signal an astonishing Jets victory.

Newtown coach Greg Matterson acknowledged after the game that while the Panthers didn’t make sure of their scoring chances in the second half, the Jets had not made the most of their own scoring opportunities in the first forty minutes. Matterson said this had been a gruelling contest in unseasonably warm weather, and he was pleased with his players’ ability and determination to finish so strongly. He especially mentioned the big forwards Sam Tagataese and Tony Williams who made valuable metres for the Jets in those fiercely-fought final minutes. Jaimin Jolliffe was again one of Newtown’s best forwards, while all the young Jets team members having their first season in senior rugby league will benefit from the experience of this game.

The Newtown Jets return home to Henson Park this coming Saturday, 22nd April, when they take on the Sydney Roosters partnership club, Wyong. This 8th round Intrust Super Premiership NSW fixture kicks off at 3.00pm.