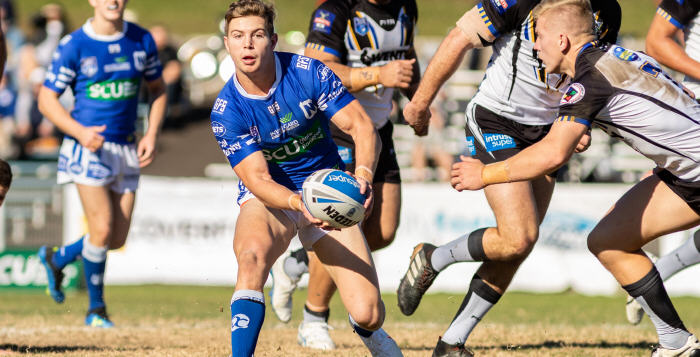 Newtown Jets hooker Blayke Brailey has been in outstanding form throughout 2018, but he will be on representative team duty this weekend. Photo: Mario Facchini, mafphotography

Another packed program of rugby league and family entertainment at Henson Park on Saturday, 7th July brought to you by SCU – More Generous Banking

The Newcastle Knights present a real danger game for the Newtown Jets.

The Knights are coming off a big win against the Canterbury Bulldogs last weekend and no doubt will be primed to deal a damaging blow to Newtown’s finals aspirations.  Missing from the Jets’ line-up for Saturday are the three players chosen in the NSW Under 20’s representative team: Centre Bronson Xerri, halfback Kyle Flanagan and hooker Blayke Brailey.

The ISP NSW match officials are: –

The Newtown-Knights ISP NSW match is being broadcast live on Steele Sports and on www.newcastleknights.com.au

The ISP NSW teams are: –

Lachlan Stein, formerly with Cronulla Sharks and Penrith and a Scottish Rugby League 2017 World Cup representative, plays his first game for Newtown this year. Cronulla Sharks NRL squad member Ava Seumanufagai will be making his debut with the Newtown Jets. Jackson Garlick, son of former Sydney Roosters and South Sydney Rabbitohs icon Sean Garlick, has won promotion from the Glebe Dirty Reds Ron Massey Cup team. Kyle Flanagan, Blayke Brailey and Bronson Xerri have all been selected in the NSW Under 20 team to play their Queensland counterparts in a curtain-raiser to State of Origin III on Wednesday, 11th July. The Newtown RLFC extends congratulations to all three of these talented young men.

The Newcastle Knights team coach Rory Kostjasyn played with Newtown from 2006 to 2008 and played in the 2006 Jim Beam Cup grand final, the 2006 Premier League grand final and the 2008 NSW Cup grand final. Later on he represented Ireland in the 2013 Rugby League World Cup, and was a member of the North Queensland Cowboys NRL famous premiership winning team of 2015.

It’s an SCU FAMILY FUN DAY this Saturday at Henson Park and as usual there will be plenty of fun for the kids on the Deicorp Family Hill featuring jumping castles, face painting and pass the ball competitions. Ice Cream Joe’s Mr Whippy and Barista will be in attendance as will the renowned Jetman and SCU – More Generous Banking’s Syd the Pig.

Young Henry’s Newtowner, Natural Lager and Cloudy Cider are available for all the Mums, Dads and over 18’s along with a selection of wines from Sparrow & Vine.

Fancy a chance to join in all of the festivities for free?

Once again in 2018 our good friends at City Ford Rockdale have the Best Seat at Henson Park and it could be yours this Saturday. The prize includes free beer, free food and free entry plus the Royal Blue Bean Bags in the Jetpac Ford Ranger to watch the game from. Just SMS “City Ford Rockdale” to 0447 046 516 and you could be this week’s winner!

Crust Pizza Dulwich Hill is offering Jets supporter a complimentary serve of Herb & Garlic Squares or a 1.25L when purchasing ant Large Gourmet Pizza from 544 Marrickville Road, Dulwich Hill. Be sure to ask our canteen staff for a free Pizza Perks Voucher for your chance to redeem this great offer.

The Newtown Jets invite members, supporters and friends to Sydney Park Hotel after the game on Saturday to mingle with the players and coaching staff and to (hopefully) be there to celebrate another Jets victory. Sydney Park Hotel is located at 631 King Street, Newtown.

It’s going to be another great day of rugby league and family entertainment at Henson Park this Saturday, so bring along all your family and friends and enjoy one of the most unique sporting experiences Sydney has to offer.

Newtown’s partnership club Glebe-Burwood RLFC (aka Glebe Dirty Reds) have a bye in this weekend’s 13th Round of the 2018 Ron Massey Cup competition.