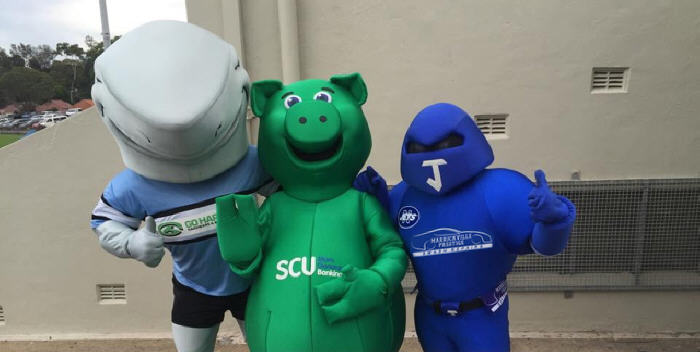 The Jets might have lost to the Mounties but there was excellent team-work between these three mascots at Henson Park on Saturday – (From left to right): Reefy the Shark (Cronulla-Sutherland RLFC), Syd the Pig (SCU – More Generous Banking) and the Jetman (Newtown RLFC). Photo: Sara Leonard

Report on the 7th round VB NSW Cup match between Newtown and Mounties, played at Henson Park on Saturday, 18th April 2015 by Glen ‘Bumper’ Dwyer.

Last Saturday’s NSW Cup match of the round between Newtown and the Canberra Raiders partnership club Mounties was a fiercely-contested encounter. The Jets were under the pump for much of the game and in fielding a much-changed team from the previous weekend, lacked the necessary firepower to get the better of the unbeaten competition leaders.

Mounties led 6-4 at halftime and 10-8 with ten minutes remaining in the game. Newtown had missed a try-scoring chance with fourteen minutes to play, and Mounties scored twice in that last ten minutes to clinch the result by 24-8.

The first half had set a pattern with the Jets struggling to win the battle of the rucks and to get some extended time with the ball at Mounties end of the field. A long break through Newtown’s midfield defence ended in a converted try to Mounties in the fifteenth minute. The Jets turned on their best football of the half in the 27th minute, with Blake Ayshford, Todd Murphy and Nathan Gardner all involved in a high-speed passing rush that put Dallas Wells over to score in the north-western corner.

Jets coach Greg Matterson urged his players at halftime to tighten up their midfield marker defence, to put more pressure on their opponents and to aim for repeat sets at Mounties end of the field. Matterson said that this game was a real battle for both sides and the Jets had to prove they were up for the challenge.

Mounties extended their lead to 10-4 in the 49th minute after Newtown errors and some uncommitted defence had given the visitors good field position. The Jets stepped up and stayed in the contest and some inventive play by halfback Todd Murphy saw him chip-kick ahead, regather and kick again for Blake Ayshford to grab the ball and score in the 60th minute. Trailing 10-8, the Jets missed a scoring opportunity in the 66th minute that would have given them the lead for the first time in the game.

Jets hooker Pat Politoni and centre Mitch Brown were both involved in try-saving tackles in the next few minutes. Newtown backrower Jack Noble suffered a head injury in the 70th minute and in the on-field confusion that followed, the wily veteran Josh McCrone stepped past a tired Jets defender and scored. 16-8 was probably a sufficient margin to win but the Mounties added another converted try two minutes out from fulltime after a grubber kick had ricocheted off a Newtown defender, and then kicked a penalty goal in the 80th minute.

Coach Greg Matterson acknowledged the Jets’ fighting display which had been disrupted by injuries, including a rib injury to their elusive fullback and goal-kicker Nathan Gardner. Matterson said that this season continued to be a work in progress and that Mounties had the experience and strength in the forwards that prevailed in the game’s latter stages.

The Jets coaching staff rated Tim Robinson (who suffered a nasty mouth laceration) and Kurt Kara as the best of the Newtown forwards, while there had been some good moments in attack from the outside backs.

The Newtown Jets make their annual journey across the Tasman to play the New Zealand Warriors this Saturday, 25th April, at Mt Smart Stadium. This Anzac Day match kicks off at 9.45am (Sydney time) and will be televised live on Fox Sports One.