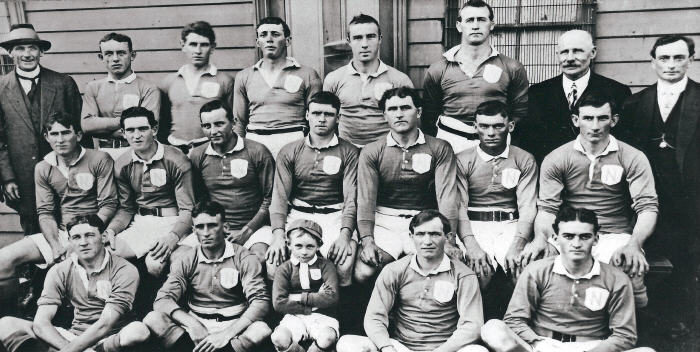 “We Will Remember Them” – Newtown RLFC WW1 Article by Terry Williams

Although the SCU Newtown Jets are away in New Zealand on Saturday, they will still pause to commemorate their ex-servicemen on this most important of Anzac Days.

That is no more than they deserve, since players and officials from Newtown notably did their bit during both world wars.

But with the focus on the centenary of Gallipoli and the First World War it is important that we uphold the promise we have made – “we will remember them”. 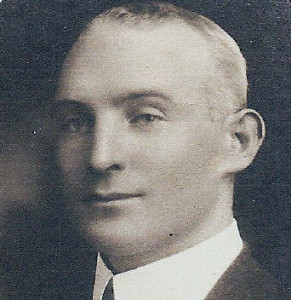 Ted Larkin (pictured above) was a Newtown Rugby Union player who made one Test appearance for the Wallabies in 1903. When the new code commenced he became a referee and then was appointed as the first full-time secretary of the NSWRL, a position which equates with Dave’s Smith’s current role as NRL CEO. Larkin oversaw the game’s spectacular growth and was directly responsible for the spread of the game to country districts of NSW, its introduction to schools and first games in outposts such as Melbourne and Adelaide. He was elected as the first Labor member of the NSW parliament from the north shore in 1913 but resigned his seat and left a wife and infant children to enlist when war broke out. He was killed in action at the landing at Gallipoli on April 25 1915.

James Williams played for Newtown in 1908 in their first season and was a regular first grader in their fledgling years. A cousin of the Bluebags inaugural captain, Harry Hammill, Williams left behind a new bride but was killed in a car accident in Egypt in 1915.

Frank Cheadle (above) was the first man to sign with the breakaway movement in 1907 and made his Test debut in 1908. A member of the first Kangaroo team to tour England he served at Gallipoli and rose to be a lieutenant. He was killed in a raid at Dernancourt in May 1916, the club’s first casualty on the western front.

Herbert Bolt had played 52 first grade games and represented NSW twice in 1913 when he enlisted in 1915. Aged 23, “Nutsy” Bolt left a wife and baby daughter but was killed in action at Fromelles on July 20 1916, Australia’s first and most tragic battle on the western front. Newtown held a fundraiser for his widow and raised enough money for her to buy a new house. His body wasn’t found until the 21st century, one of those located at Pheasant Wood in a mass grave. DNA testing then allowed Nutsy to be finally given the burial he deserved, which his grandchildren and wider family were able to attend.

Alex Clingan was the only other rugby league player found in the mass grave at Fromelles. He was a promising lower grader with Newtown, and he too, was able to be identified through the DNA of family members, though he himself was an unmarried labourer when he enlisted. 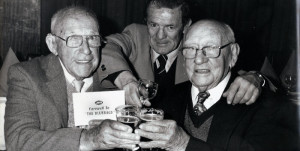 Tedda Brooks served at both Gallipoli and on the western front and came home to resume his rugby league career. His service record shows that, like many of the Anzacs, he was an excellent soldier when in the front line but less willing to submit to the rigours of army discipline when in the support trenches. He was still following the Jets in 1983 and attended their Farewell Dinner that year, and lived to be 100.
Joe Murray had won a premiership with Newtown in 1910 and had toured with the 1911-12 Kangaroos, and the NSW team to New Zealand in 1913. He served with the 7th Field Company Engineers, won a Distinguished Conduct Medal and was selected for the AIF Rugby Union XV at the end of the war.
Stewart Mansfield had deputised for Murray in his one first grade match for Newtown against Souths in 1913 and was another who left a wife and daughter behind to enlist, aged 23. He died of wounds at Gallipoli on September 2, 1915.

Sydney Sparrow was a prominent amateur athlete who had appeared for Newtown in their 1910 premiership season before being caught in the middle of an argument about whether playing league as an amateur affected his status for other sports. Another Newtown serviceman who was commissioned as a lieutenant, he died of wounds in France on May 9 1917.

Alexander McDowell was an up and coming talent who had made two first grade appearances before he enlisted. Aged 21 he left behind his new bride to enlist in early 1916 but was killed in action at Ypres, Belgium on October 9 1917.

Viv and Billy Farnsworth, both major International stars, were playing with Oldham (then one of the top clubs in England) when war broke out. They both served with British units and survived the war, as did brother Roy, who served for three years in the Middle East.

And this just scratches the surface – there are plenty of others such as the wonderfully named Septimus Killigrew, Joe Mansted (who played for NSW in 1922 and went on to coach St George’s first ever premiership winning team), Arthur Dennis, Fred Nelson (who accompanied the 1911-12 Kangaroos as an official visitor), Robert Cleland, Michael Mogan, Jim “Fatty” Warwick, Jack Main, Bill Kelly (who didn’t play for Newtown but played Test football for both NZ and Australia and then coached the Bluebags in the 1930s) etc, etc, etc.

Each of these stories would be worth a movie in its own right, but there are many, many more. Compiling a definitive list has proved impossible without comprehensive club and junior league annual reports but it is safe to say that the number of Bluebag players from the senior club and those junior league clubs within the area would be well in excess of 100.

To mark the Anzac centenary the NRL Museum has produced a documentary, which is to be broadcast on television later this year. The brainchild of Terry Williams, who has written two books on Newtown’s history and is now resident historian at the NRL Heroes and Legends Museum, it will feature many of these stories in detail. Of special interest to Newtown fans will be interviews with descendants of Nutsy Bolt and Frank Cheadle.

“Headgear to Helmets” will also examine the social implications for rugby league on the Home Front, with the game caught in the middle of two conscription referenda and the Great Strike of 1917. Newtown will feature prominently in the documentary, which is no surprise since the club has always been the face of the nation as much as the game itself.

So when we are asked to stop, stand and remember this week these men, their service and sacrifice should be foremost in the memory of Newtown fans.

We pay our respects to them and all those defence personnel who have served our nation.