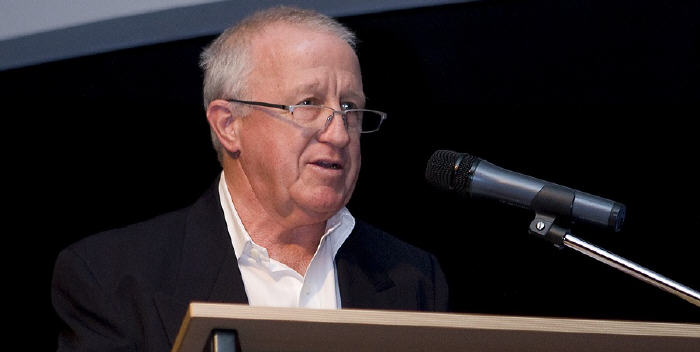 Barry Vining has stepped down as President of the Newtown RLFC, after a quite remarkable 31 years in that role. Photo: Gary Sutherland Photography.

Barry Vining, without doubt one of the greatest figures in Newtown’s 110 year history, has stepped down from his long-term role as President of the Newtown RLFC. A longer written tribute to Barry Vining’s presidency will be submitted in the near future.

Here are some details of his time with the Newtown Jets. Barry lived in Camperdown as a young boy and in fact lived in the same neighbourhood as Johnny Raper. He was from a family of committed Newtown Bluebags supporters and first became involved with the club in an official capacity in the late 1970’s. He became a Newtown RLFC Director in 1980 and was there amidst the turmoil of late 1983 when Newtown was at first suspended from the NSW Rugby League grade competitions, and then later formally expelled. Barry became President in 1986 and was one of the gallant few (including present-day Director Terry Rowney) who kept the club alive between 1984 and 1990, when the club fielded no rugby league teams.

Barry Vining’s presidency has seen the club survive and re-enter rugby league  in 1991 in the NSWRL Metropolitan Cup competitions. After winning four premierships in the 1990’s, he was President when the club was granted admission to the second-tier of rugby league in the NSWRL First Division competition in 2000. The Jets have known good and bad times at this level of rugby league, winning the NSW Cup premiership in 2012 and losing two grand finals in golden point extra time in 2006 and 2008. Newtown still compete in the re-named Intrust Super Premiership NSW and the Jets’ story is one of the great survival sagas of modern rugby league. Barry Vining’s presidency and administrative capabilities surely share that legendary status.

The club will be paying further tribute to Barry and we extend every good wish for the future to him, his wife Vicki and their family members.

At the club’s Board meeting on Monday, 19th February 2018, Barry Cotter was elected as the new Newtown RLFC President. Barry was also born and bred in the Newtown rugby league district and comes from a family of rabid Bluebag supporters. He has had a lengthy career of political, industrial and community involvement and achievement. Barry was the former NSW Secretary of the Administrative and Clerical Officers Association, a forerunner of the modern-day Community and Public Sector Union. He served as a Councillor on Marrickville Council for 21 years, from 1987 to 2008, and as Mayor of Marrickville from 1991 to 2004. Along with his legal qualifications, no-one has a better knowledge of inner-western Sydney’s business community and changes in population and cultural trends, and no-one could be better prepared and qualified to serve as the new President of Australia’s oldest rugby league club.