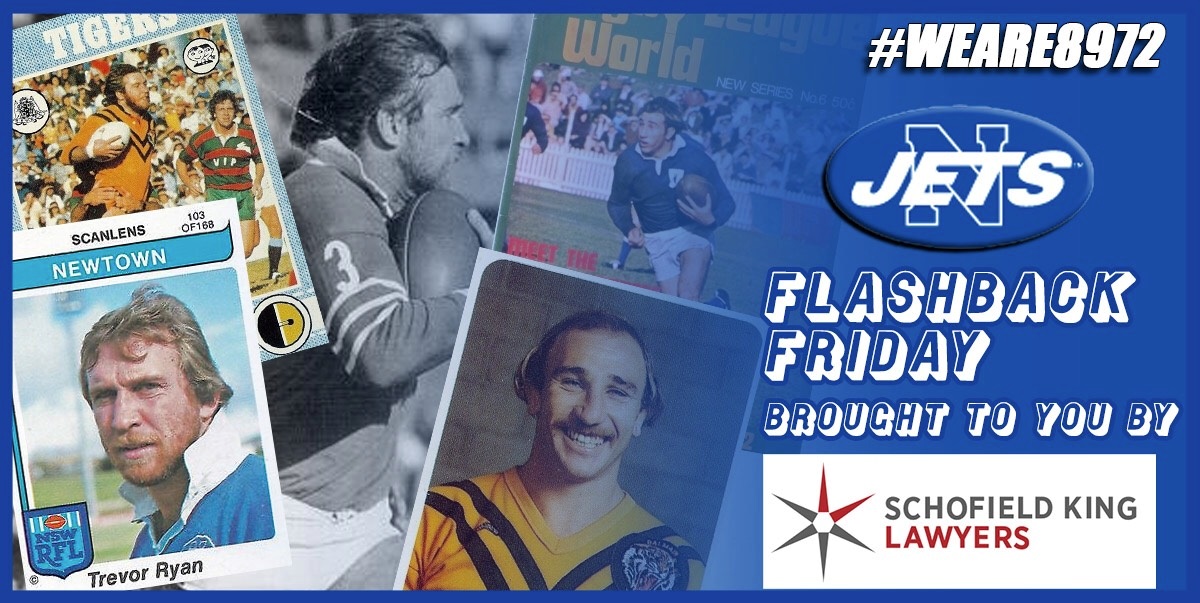 The team at SK Legal are on our side. So if you need legal advice or assistance, get them on your side as well. Support those who support the Jets! Image: Mario Facchini, mafphotography

With less than 5km separating Leichhardt Oval and Henson Park, there’s no disputing that when it came to premiership football, the Balmain Tigers were Newtown’s closest neighbours.

With that in mind, it should come as no surprise that there have been many players who over the years have donned both the royal blue of Newtown and the black and gold of Balmain. This week, we look at some of the men who have held such an honour at first-grade level.

We’ve already touched extensively on Hyde’s playing career in a previous article, but it’s worth noting that not only did he play for both Newtown and Balmain during his career, but his first-grade debut for the Bluebags in 1936 was actually against Balmain.

A highly talented fullback from the Illawarra region, McMahon joined the Tigers in 1975 after starring for Country Firsts in 1974. A fearsome kick returner, with a mighty boot on him as well, McMahon represented Australia as a winger on five occasions between 1975 and 1977, and also toured with the Kangaroos in 1978. In 1979, McMahon earned the ire of the Newtown faithful when he was sent off at Henson Park for a brutal spear tackle on Jets centre Mick Ryan. Ironically, the two would become the club’s centre pairing when McMahon left Leichhardt for Henson in 1982. After a final season with Canberra in 1983, McMahon turned his hand to coaching and served as the Newcastle Knights’ inaugural first-grade coach. He passed away in 2003.

A Newtown junior, the man they called ‘Bing’ burst onto the first-grade scene in 1972 after initially being graded by the club as a 15-year-old hooker five years earlier. After being shifted to lock in 1973, the mustachioed Pringle played a prominent role in Newtown’s Wills Cup Final win and was also present for the club’s finals campaign under Jack Gibson. In 1975, Pringle joined Balmain, where he would win a Wills Cup and Amco Cup double in 1976, with his combination with British prop Brian Lockwood proving particularly vital in the latter victory. Pringle would, unfortunately, be struck down by a mystery virus that attacked his nervous system in 1979 and while he did make it back to the field, he eventually had to make way in the Balmain pack for a young lock named Wayne Pearce.

Hailing from Nambucca Heads on the mid-north coast of NSW, Ryan arrived at Balmain in 1972 as a teenage centre. A shining light in a battling Tigers side in the early 70s, Ryan was promoted to captain in the middle of the decade and was the Tigers’ skipper in 1977 when the club broke through for its first finals appearance since winning the premiership in 1969. After representing NSW in 1978, Ryan joined the revolution being conducted by his namesake Warren Ryan at the Jets in 1979. However, by the time Newtown had begun its grand final assault in 1981, Trevor had shifted to Western Suburbs.

Arguably more famous for his off-field exploits than his on-field efforts, Elias made his first-grade debut for Newtown as a 20-year-old when he came off the bench for the Jets in a 19-12 win over St George at Henson Park in 1983. Following Newtown’s demise at the end of the season, he shifted to Souths for 1984, but came to prominence the next year after helping Wayne Bennett’s Southern Suburbs Magpies to a grand final win over Wynnum Manly in the BRL grand final. Returning to Sydney in 1986, he played for Canterbury, Wests and Easts before a five-year stint with Balmain between 1989 and 1994. After one final controversial stint with South Sydney, Elias returned to Newtown in 1996 where he would win a Metropolitan Cup title after scoring two tries in the grand final win over Ryde Eastwood.

A local junior, Pobjie made his first-grade debut for Newtown as a long-haired fullback under Warren Ryan during the Jets’ memorable 1981 season. Moving to Souths in 1983, Pobjie would soon make a name for himself as an aggressive centre during the Rabbitohs’ memorable finals campaigns of 1984 and 1986. Recruited to Balmain by Ryan in 1988, Pobjie represented the Tigers in their two consecutive grand final losses to Canterbury and Canberra.

A North Ryde Hawks product, Webster was a handy prop for Balmain during some tough times in the early 80s. He shifted to Newtown in 1983, with whom he gave great service during our final season, playing in 22 of our final 26 first-grade games, including the memorable win over Canberra at Orana Park in our final top-flight appearance. Following Newtown’s demise, Webster went to Wests, retiring at the end of the 1987 season.

Arguably the most talented junior to come out of the Newtown district during the latter stages of the 20th century, Sigsworth played a highly prominent role in Newtown’s return to respectability during the early 1980s. After representing Australia against France in 1981, the utility back shifted to Manly for the 1983 season, where his strong showings in the centres saw him named Rugby League Week Player of the Year. He joined Canterbury in 1985 and earned an unwanted slice of rugby league history the following year after being sent off in the club’s grand final loss to Parramatta. Recruited by new Tigers coach Bill Anderson for the 1987 season, Sigsworth struggled with injuries while at Balmain and retired after just nine first-grade appearances.

After making his first-grade debut as a 17-year-old for Balmain, Morris arrived at Newtown the following year after an approach from Jets skipper Tommy Raudonikis. After spending the majority of the season in reserve grade, Morris was elevated to first-choice five-eighth on the eve of the 1981 finals and was Raudonikis’ starting halves partner in the grand final loss to Parramatta. When the Jets folded at the end of 1983, Morris shifted to St George with whom he spent two seasons before knee injuries forced him into retirement.