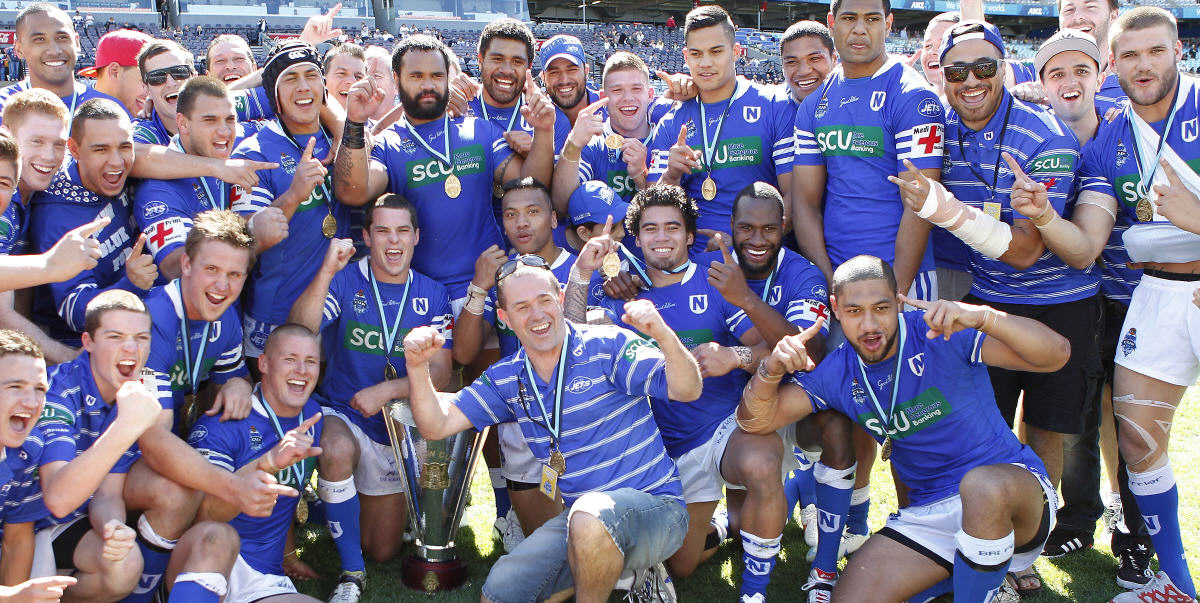 How sweet it is! The 2012 Newtown Jets celebrate their premiership victory. Image: Mike Biboudis

The Newtown Jets completed one of the most captivating chapters in the club’s 104 year history, by claiming the 2012 VB NSW Cup premiership title with a 22-18 win against fellow 1908 foundation club, the Balmain Tigers.

This Grand Final triumph at ANZ Stadium climaxed an extraordinary run of narrow victories and upset results extending from the second-last competition round and through each week of the final series.

The premiership conquest was also associated with an unprecedented level of public support and intense media interest that no doubt helped motivate the players and coaching staff throughout this successful late-season march to the premiership.

The Grand Final win itself won’t be remembered as a faultless performance – in fact it was probably the Jets’ most flawed showing in the past five weeks. Yet it was enough to get the job done against determined and worthy opposition, and there were some memorable performances by several Jets players.

Newtown had the better of the first thirty minutes and could well have opened up an unassailable lead in that period.

Halfback and captain Daniel Mortimer set the scene with a 40/20 touch finder in the fifth minute, despite being under great pressure as he got his kick away.

The Jets had the Tigers back-pedalling and after gaining valuable ground from a midfield penalty centre Peni Tagive went very close to scoring, only to be denied by the video referees.

Newtown maintained the pressure on the Tigers at their own end and forced the Watersiders into a goal-line drop-out. The Jets then elected to take a tap from a penalty inside Balmain’s quarter and tough second-rower Jack Bosden forced his way over to score from close range. Another conversion by Mortimer gave Newtown a 12-0 lead after 20 minutes.

Errors began to creep into Newtown’ s play from about the 20th minute mark and the Jets failed to capitalise on a superb line-break by lock Ahmad Ellaz, a missed scoring opportunity that would have extended their lead to 18-0.

Balmain hit back with a vengeance and classy offloads and strong support play in Newtown’s quarter saw the Tigers post an unconverted try. Balmain clearly gained the momentum in the last ten minutes of the first half and the Jets started to look vulnerable as the Tigers gained more possession and challenged Newtown at their own end.

Balmain scored again three minutes out from halftime from a kick into the Jets’ in-goal, and the subsequent conversion narrowed the Jets’ lead to 12-10. The Jets had to defend desperately right on their own line to maintain that precarious two-point lead into halftime.

As the players left the field for the break, the Channel 9 commentary team predicted that the warmer conditions down on the playing surface would work against Newtown’s big forward pack in the second half.

To add to the Jets’ concerns, quality second-rower Jack Bosden had broken his arm late in the first half and was gone for the rest of the match.

Coach’s warning at half time

Newtown coach Greg Matterson stated the obvious to his players at halftime – they had invited the Tigers back into the game late in the first half as their intensity dropped off, tackles began to be missed and the error count mounted.

Newtown had a surplus of time in possession for most of the first half but the ratio had swung to the Tigers in the last ten minutes.

Despite errors by both sides, the second half proved to be a mesmerising spectacle for the tens of thousands at the ground and the huge live television audience. The lead was to change four times in the tension-charged second session.

Jets errors gifted Balmain the possession they wanted and a try five minutes into the second half put the Black and Golds into the lead for the first time in the match.

A top-class set by the Jets in the 50th minute took them well downfield and a slick passing movement resulted in a slashing try to centre Francis Vaiotu, restoring the lead to Newtown by 16-14.

A forward pass by the Tigers in the 55th minute ruled out another Balmain try but the Jets kept the pressure on themselves with turnovers in three consecutive sets of possession.

Luck favoured Newtown as the Tigers lost the ball only ten metres from the Jets’ line, and then the video referees correctly denied Balmain a try in the 60th minute. A bad defensive read on Newtown’s right-side defence enabled the Tigers to score wide out and regain the lead with 15 minutes remaining.

The intense pressure and the warm on-field conditions were causing further errors by both teams.

Jets prop Josh Ailaomai put on a big play with a massive crash tackle that forced a turnover by the Tigers 20 metres out from their own line.

Newtown hooker Nafe Seluini had been worrying the Tigers with his dummy-half forays and then he struck hard in the 71st minute when he dived over from a play the ball close to the Balmain line. Mortimer’s third goal gave Newtown a 22-18 lead.

The final eight minutes passed like an eternity of torment for Newtown’s supporters, as the Tigers broke away menacingly down their right-hand flank. In a game-defining moment, Balmain had a second try disallowed by the video referees when the Tigers winger failed to safely ground the ball after a well-placed kick was threaded into Newtown’s in-goal.

The Jets survived losing possession at Balmain’s end and then conceding a midfield penalty. The fulltime siren signalled Newtown’s first premiership since re-joining this second-tier level of Rugby League back in 2000.

How sweet is victory

The victorious Jets received a great reception from the ANZ Stadium crowd and later on a rapturous welcome from hundreds of their supporters back at a packed Petersham RSL Club.

Jack Bosden had a big first half prior to his match-ending injury and benchman Nafe Seluini performed his impact role to perfection.

Front-rowers Mose Masoe and Josh Ailaomai made valuable metres in the game’s critical moments. The Jets defended bravely in a second-half where the Tigers had a considerable surplus of possession.

The men in blue who took the field for the Grand Final together with the other wonderful players who contributed to the march to victory.

Club Captain, Khalid Deeb, was there, so unfortunate to be denied a share in the victory because of his season-ending injury in an early round; Tom Symonds who stepped in as captain and led the Bluebags mid-season campaign until he too succumbed to injury; Adam Henry who was brilliant at five-eighth in our march through the finals; our bench reserves, Samiu Latu, Glenn Dumbrell, Mark Kheirallah and Jack Littlejohn who made huge contributions with top-class performances during the season, Jack being the one who lifted Jets supporters spirits with the ‘impossible’ after-the-bell penalty goal on Reunion day that put us into the Finals race; … and so many other great, committed players who were part of the 2012 Premiership story.

How good it is to be a Bluebags supporter!